After Season 1’s addictive thrill ride, did you really think Killing Eve would slow down at all in its sophomore run? Not bloody likely.

BBC America’s wickedly clever crime thriller returns for Season 2 this Sunday (8/7c), and the premiere doesn’t even give us a chance to catch our breath, picking up literally 30 seconds after the finale’s climactic showdown between Eve and Villanelle. “The obvious route was to have picked up six months later, when everyone was healed and everything was back to normal and reset,” new showrunner Emerald Fennell, who takes the reins from Phoebe Waller-Bridge this season, tells TVLine. But “something’s happened here, and it’s going to change everything. So it gave us an opportunity this season to keep everything we love about the show, but also take it sort of further and deeper and darker.”

Stabbing Villanelle leaves Eve in a darker place indeed when we see her again, star Sandra Oh reveals: “She’s in this incredibly guilt-laden [state of mind]: ‘I’m going to be in a lot of trouble, and what does that mean to me, and how do I hold that and not tell Niko, and how do I try to be normal?’… She’s not realizing yet that she can never go back to how her life was.” The new season doesn’t give her a lot of time to process those feelings, though. “We go from stressed to more stressed,” Oh says with a laugh. “There’s no rest for her. We’re going full steam ahead throughout the entire second season.”

Eve also gets pulled back into Carolyn’s orbit in Season 2, which presents her with some new workplace dynamics. Nina Sosanya (Strike Back) joins the cast as Jess, who provides Eve with “someone who’s a confidante who’s basically her same age, who’s also a woman, and a woman of color,” Oh previews. Plus, Edward Bluemel (A Discovery of Witches) plays cocky young co-worker Hugo, who puts Eve in an unfamiliar position: that of boss. “Eve also finds herself in a [position] of authority,” Oh says, “and is also still exploring her power, and her sexual power, and the dynamic of a younger man.” 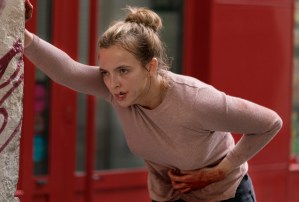 But how long will we have to wait until Eve and Villanelle cross paths again? “Not that long,” Oh promises, adding that the mutual obsession they had in Season 1 hasn’t faded at all: “Eve is still in denial of how much Villanelle is on her mind, but they’re clearly on each other’s mind.” Killing Eve is classified as a crime thriller, but it’s also “a love story, in many ways,” Fennell notes. “And a love story is a very different thing to write, and it can go on for much longer, but it can also be more brutal, and end more tragically, than a thriller.”

Yeah, about that tragedy thing: Eve racked up an impressive body count in its freshman season (RIP, Bill), and Fennell hints that Season 2 could cut even more deeply into its main cast. “What’s important for me is that no one needs to survive any scene. Girls like Villanelle don’t last very long, and women like Eve don’t last very long, because they’re playing a very dangerous game. So I had to come into this season thinking no one is safe… Villanelle’s absolutely not safe anymore. And neither is Eve.”

Got predictions for Killing Eve Season 2? Drop ’em in a comment below.