At last May’s Upfronts, I suggested to CBS’ entertainment chief that SEAL Team‘s Season 2 renewal must have been a close call, given, as I put it, the freshman drama’s “disappointing” ratings.

The premise of my question was refuted — SEAL Team at the time did rank No. 3 in the demo among all CBS dramas, though it was ninth in the network’s famously and frequently touted measure of total viewership. But to this day, more than midway through Season 2, I maintain that this show should be doing better. And I remain puzzled as to why it isn’t.

Much of Season 2 has only reaffirmed my regard for the broadcast-TV show’s delivery of drama, starting with the tragedy that upended Bravo leader Jason Hayes’ home life and forced him to press pause on his demanding job, up through to Sonny Quinn’s brush with a watery death and, most recently, the action-packed March 27 episode that found Jason’s team tasked with executing a warlord while positioned as veritable sitting ducks. Though it’s tempting to make every episode of a military drama such as this about “stopping the next Bin Laden,” SEAL Team has deployed the team on a wide variety of missions in a wide variety of locales, mining tactical and logistical curveballs for edge-of-your-seat drama. 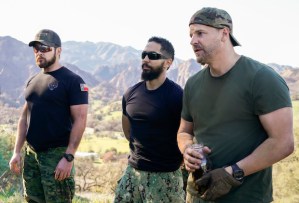 The cast in turn always rises to the occasion. Series frontman David Boreanaz in a midseason arc effectively conveyed Jason’s arguably compromised decision-making in the wake of a fellow team leader’s death, while when Stateside he and TV daughter Kerri Medders communicate a palpable bond that brings enormous weight to the complications they now face as a fractured family. AJ Buckley (a recent TVLine Performer of the Week), Neil Brown Jr. and Max Thieriot have created wonderfully specific and flawed heroes in Sonny, Ray and Clay — one of the show’s greatest assets is the very distinct dynamic between any given pairing of characters — while Judd Lormand always keeps us guessing as to how Lt. Cdr. Blackburn might weigh in on a tactical or moral dilemma.

Toni Trucks as of late has been relegated to a “forbidden” romance subplot between Lisa Davis and Sonny (in which she has nonetheless shone), but her logistics officer’s decision to enter OCS — and brave the training program therein, in the episodes to come — promises to bring new layers to the role. And that excites me. Playing CIA analyst Mandy Ellis, Jessica Pare is almost by definition limited in the frequency and depth of her interactions with the larger ensemble, but she gets the occasional spotlight, such as when leveraging a journalist to act in service of a greater good, or when duped by what she believed to be a foreign asset. 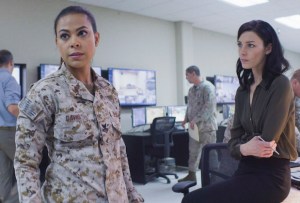 All of the above is punctuated by top-tier production values that take this broadcast series to cable-caliber levels, shooting on location in visually unique and compelling places and employing effects and stunt work that put the viewer in the proverbial line of fire. (Tell me you didn’t occasionally duck when the bullets were zinging back and forth during last week’s shootout across the Iran/Pakistan border, and I will call you a liar.) But it’s quieter moments pack a punch, too, especially as the series zeroes in on the innate difficulties a marriage/relationship must innate endure when one party must spin out at a moment’s notice to parts unknown, taunt death, and then come back and not be able to say many a word about it all.

The 2017-18 TV season brought us three similar broadcast dramas about elite military types doing elite military things — in the wake, mind you, of the History channel’s SIX also deploying its own SEAL Team. But while The CW’s Valor and NBC’s The Brave (and eventually SIX, after two seasons) wound up falling by the wayside, SEAL Team lived to see another day. Because CBS saw not just justifiable numbers, but presumably because of the show’s potential, as well.

So why isn’t it drawing a bigger audience?

On paper and in practice, this is a fastball down the middle for the CBS crowd, a not-very-serialized procedural about good guys versus bad guys. The genial Boreanaz brings with him 20-plus consecutive years of TV stardom. And until recently, SEAL Team benefited from having the still-going-strong Survivor as its lead-in. And yet its current average is down a full 20 percent from Season 1, now placing it No. 7 in the demo among all CBS dramas and 12th in total audience.

Fox’s buzzy breakout hit, The Masked Singer, surely created unexpected midseason competition above and beyond what Chicago Fire, one of NBC’s top-rated dramas, already was providing in the 9/8c time period. And ever since it started airing later, in Wednesday’s 10 o’clock slot, SEAL Team has led out of freshman CBS reality shows that arrived with a ratings thud. (Its most recent episode, airing after something called Million Dollar Mile, slipped to series lows, drawing a 0.6 rating and just 3.9 million viewers.)

Hopefully, as CBS has done in years past when giving the waning Criminal Minds the benefit of a doubt at renewal time, SEAL Team‘s considerable competition and new, handicapped time slot — as well as its performance internationally — will be taken into account, so that Bravo Team can continue to fight the good fight.