Because Veep suffers when Selina’s not in the political arena, doesn’t it? Read on for the highlights of “Iowa.”

ANOTHER GO | The episode opens with Selina on a jet to Iowa, where she’s planning to announce her latest run for the White House. Leon urges her to figure out what she wants to say about why she wants to be president again, but Selina brushes him off. Meanwhile, Dan and Amy wait at the airport, where they’ve organized a rally of Meyer supporters. But when Selina’s plane touches down… there’s no one there: Turns out, she arrived at Cedar Falls, Iowa, when she should’ve landed at Cedar Rapids, Iowa. The screwup prompts Selina to have amy do a post-mortem on the previous campaign in order to identify problems and weak spots. Of course, Selina is the biggest problem and/or weak spot, and when that becomes unavoidably clear, the former prez shuts down the discussion. “Guys, this is not going to be a repeat of my last campaign,” Selina tells her team, adding that she wants to bring a man named Keith Quinn in as campaign manager. (Sorry, Ben!) Meanwhile, on the television, Buddy Calhoun announces his intention to run for president. And Marjorie informs her mother-in-law that there are serious problems with The Meyer Fund, and Andrew (naturally) is nowhere to be found.

There are several mass shootings that happen elsewhere in the country during the episode; the first takes place as Selina is meeting the mayor of Lurlene, Iowa, who happens to be a dog. Like, a literal dog. (Are we really that surprised to find out that Lurlene is Richard Splett’s hometown?) After stumbling through the standard “thoughts and prayers” rigamarole, Madame President returns to her headquarters to meet Keith on his first day. Except the guy she thought was Keith Quinn is not actually Keith Quinn. But rather than have the press get wind that the campaign has messed up again, Selina & Co. keep Keith around and have him think he’s running the show. Meanwhile, they hold secret staff meetings in Ben’s office and hatch a plan to announce Selina’s Oval Office attempt in front of Susan B. Anthony’s birthplace, which is where she announced her first run for the presidency nine years earlier. 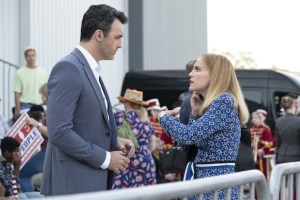 A DECISION MADE | Amy is still pregnant, and when the campaign reaches New Hampshire, she announces to Dan that she’s thinking of keeping their baby. He’s slightly taken aback but says he’ll consider what she’s said; this gives Amy a bit of hope that is dashed when he tells her he’s going to sleep with a reporter that night. The next morning, he tells her he’s not ready to be a dad. “But if you want to go dutch or whatever on the abortion, just hit me up on Venmo,” he says. And you know what? Make it public. Shows everyone I’m a gentleman.”

SIBLING LOVE | Elsewhere in New Hampshire, Jonah is riding high off the public’s love for his new wife, Beth… who just happens to be his stepsister. (Their parents were married for a year when they were pre-teens.) When his team — Richard, Bill and a “chemically castrated” Teddy — find out, they’re incensed that Jonah has given the press yet another facet of his campaign to mock. So they try to get ahead of the story by sitting down for an interview with CBS This Morning‘s Jane McCabe. Little do they know, Jane has invited Jonah’s stepfather/Beth’s father Lloyd to take part, as well. And it turns out that, in addition to being a genuinely sweet guy, Lloyd is still in love with Teddy’s mother, Nancy.

A WOMAN FIRST: FIRST WOMAN | At Susan B. Anthony’s birthplace, Selina’s people hit a snag: Her campaign never paid the staging company nine years ago, and the owner is so mad, he’s refused to put up the tents and such for her big announcement. After Selina briefly chats with the man before passing him off to Gary, the team receives word that another mass shooting in a Phoenix, Ariz., mall has left 27 people dead. Selina’s look of horror quickly changes to one of opportunity: “Could this work for us?” she tentatively asks, getting a lot of yeses in return. 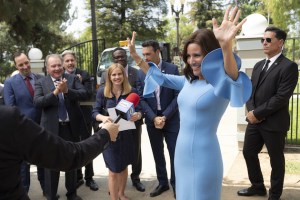 So she approaches the gaggle of press that have arrived to condemn the shooting and offer sympathy for the victims’ families. And sensing that her moment has arrived, Selina then repurposes the angry tent guy’s rant about “hoity-toity people” vs. the working class and fashions it into her official announcement: She’s going to run for president!

On the plane after, Selina’s joy over nailing her big speech is quelled by Kent’s update that Jonah’s interview actually boosted him among white male voters. And then they all watch a live broadcast as Selina’s former hookup Tom James formally throws his hat into the presidential ring, as well.

MORE BRIEFINGS | Richard is working for both Jonah and Selina’s campaigns, a situation that probably won’t be tenable much longer. Mike is now a reporter for “Buzzfeed’s print edition” who’s struggling to make his daily post quota.  And Selina’s desire to use grandson Little Richard as nothing more than a campaign prop angers Catherine, who’s suffering from post-partum depression.