Sandra Oh slayed as cohost of the 76th annual Golden Globe Awards. Can the same be said about her  Saturday Night Live hosting stint?

Oh’s sketch-comedy debut came a week and a day ahead of the launch of Killing Eve Season 2, a show that has already earned her a Critics’ Choice, a Golden Globe and a SAG award. And while there was no parody of the aforementioned BBC America drama to be found during this weekend’s broadcast, Oh had plenty of great showcases and proved herself a total pro. (Don’t be surprised if she picks up two trophies at this year’s Emmys: one for Lead Actress in a Drama Series, and the other for Outstanding Guest Actress in Comedy Series.)

As good as she was, though, the skit that will have everyone talking on Sunday morning featured Oh in a supporting role opposite repertory player Chris Redd, who once again portrayed embattled Empire star Jussie Smollett in a meeting with Fox executives.

Scroll down for all the highlights…

BEST: FUTURE SELF
There’s no denying it: Tishy definitely got that “good goo goo!” Oh was an absolute riot as the 47-year-old, Four Loko-fueled girlfriend of Mikey Day’s future self, whose appeal was… definitely up for debate.

BEST: THE DUEL
This digital short featured Oh as the hapless victim of a Victorian-era duel gone horribly wrong. The more excessive the wounds, the funnier the sketch got, as multiple bullets ricocheted and struck the woman whose affection was up for grabs. 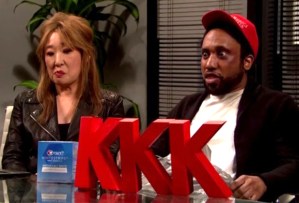 HONORABLE MENTION: NETWORK MEETING
Yes, SNL went there. Redd’s Smollett (who was first seen in March 2’s “Legal Shark Tank“) arrived late for a meeting with Lee Daniels in a Make America Great Again hat and alleged that he’d been attacked — again. The studio audience seemed unsure how to react as Smollett presented a plastic bag full of supposed evidence (including Crest White Strips, three letter ‘K’s and… a Teletubbies doll?) and referred to himself as the “gay Mike Tyson.” The bit was more awkward than it was funny, but it wasn’t a total failure, either. (Watch it above.)

HONORABLE MENTION: DISCOVER CARD
This Ego Nwodim-led commercial skit — which doubled as a spoof of the Jordan Peele film Us — was far too short to have any lasting impact. As far as SNL parodies go, last season’s “A Kanye Place” was significantly better.

WORST: KREMLIN MEETING
Oh had very little to work with in the role of Kim Jong Un’s translator. She appeared opposite Beck Bennett’s Vladimir Putin in this dud, during which the Russian president tried to convince those in his inner circle that he was still a “powerful, scary guy,” even after the Mueller report (or rather, a four-page summary of the report) concluded that Trump did not in fact collude with Russia.

WORST: ELECTRIC SHOES
It’s hard to go wrong when you put Kenan Thompson at the center of a sketch and just let him sing (“What Up With That,” anyone?). This, however, was a total misfire. Jarvis Filmore’s relentless encores would have been amusing had his song about electric shoes been the least bit funny, but it wasn’t. It was four minutes of Thompson rambling incoherently through a melody with very few actual lyrics.

What were your favorite sketches this week? And what missed the mark? Watch all of the highlights above, then grade Oh’s Saturday Night Live hosting stint in our poll.