What can’t Donald Glover do?

The onetime Community star returned to NBC this weekend by way of Saturday Night Live, where he served not only as host, but as musical guest Childish Gambino. (Seriously, how great was “Saturday”?)

The episode made great use of its multi-faceted emcee, whose well-honed skills as an actor, comedian and singer all came into play in a number of solid sketches. What follows are my favorites, as well as the one skit I wish I had skipped.

BEST: A KANYE PLACE
With Stormy Daniels occupying the cold open, SNL saved its best Kanye West material for this terrific parody of A Quiet Place. One by one, Glover & Co. — unable to contain their shock and awe as West took to Twitter to voice his support of President Trump — were snatched by the monsters.

BEST: ’80s MUSIC VIDEO
What began as an obscure send-up of a 1980s music video took on a life of its own, as Glover’s Raz P. Berry discovered the woman he was stalking was not in fact, his two-timing girlfriend, but a happily married woman enjoying a night out with her husband. (Whoops!)

BEST: DIRTY TALK
Melissa Villaseñor had me howling as the girlfriend incapable of engaging in dirty talk. Glover was also a hoot as the exasperated boyfriend who never thought he’d have to tell his significant other to avoid a Bill Cosby impression in bed.

HONORABLE MENTION: LANDO’S SUMMIT
Solo‘s Lando Calrissian was front and center in this perfectly pointed post-Weekend Update sketch, which called out the Star Wars universe for its lack of diversity. 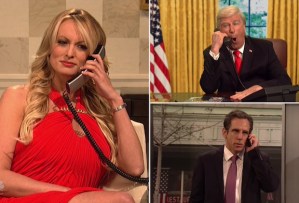 HONORABLE MENTION: MICHAEL COHEN WIRETAP
The cavalcade of guest stars — including Ben Stiller, Scarlett Johansson and Jimmy Fallon — saved this otherwise lackluster cold open. Daniels’ cameo was amusing for what it was, but it was Martin Short who got the biggest laughs during his all-too-brief stint as Dr. Harold Bornstein. (Watch it here.)

WORST: COURTROOM
This was a peculiar choice for the post-monologue slot. Glover (playing a screwball attorney defending Jurassic Park in a wrongful death suit) tried his hardest to make it work, but the only one laughing was Kenan Thompson.

What were your favorite sketches this week? And what missed the mark? Grade the episode via the following poll, then hit the comments to flesh out your thoughts.