Madam Secretary‘s Elizabeth McCord hasn’t even publicly declared her presidential intentions yet, but that’s not stopping her potential rivals from coming out of Washington’s woodwork.

Exhibit A: Kentucky Sen. Owen Callister, played by Smash/Nashville alum Will Chase , who resurfaces in this Sunday’s episode (CBS, 10/9c). You may recall that when Callister first appeared earlier this season, he refused to support a military aid bill Elizabeth espoused, he was revealed to have ties to white supremacists in the past, and he (gasp!) got a D.C. eatery to boot the McCords from brunch. And that’s when Kat correctly sussed out that his animosity toward Elizabeth wasn’t just a matter of political disagreement: Callister has designs on 1600 Pennsylvania Ave., as well.

We chatted with Chase, who’s currently starring in Kiss Me, Kate on Broadway, to see what’s in store for his White House hopeful in the coming weeks.

TVLINE | So you’re back for three episodes.
It is three episodes. We’re trying to get a little more backstory on the guy. [He’s a] little xenophobic, and as things clear out, a little bit more of that plays out. And of course, my mother being from Kentucky, she’s like, “Why do they have to shine such a bad light on Kentucky?” [Laughs]  I’m like, “Hey, look, Mom, I don’t write this stuff.”

But it’s fun to play, and it’s a fun set to be on. Of course Eric Stoltz is a [Madam Secretary] producer and directed a bunch of Nashville. That’s how I kind of came to be in that world. The cast is great. They’re very Broadway-friendly, too, so it’s really nice. 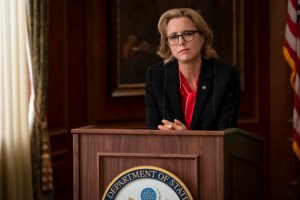 TVLINE | In this show, Elizabeth stands for logic, humanity, ideas of that nature. Talk to me about playing the other side of that, especially given the kind of political and social times that we are in.
Well, so the funny thing about it when I first got offered the thing… I said, “I know where we’re going with this. He’s probably going to be a xenophobe, he’s probably going to have some racist tendencies.” But the thing that I wanted to make him was likable and logical, because those are the people to me in our current climate that are the scariest — and this is Will speaking here. Yeah, Trump’s scary, but Trump scares me less than the people who actually believe — because Trump flip-flops, and he’ll believe whatever he wants to believe on a certain day.

The guys that are scary to me are the people that actually believe that immigrants are bad, or believe that these people are refugees… So I wanted to make him actually quite charming. I wanted to make him actually quite logical. I think he thinks, “Well, no, this is what a lot of people think, and I must be right because a lot of people think this…” He’s defending himself wholeheartedly, and those are the people that are more scary to me than the Trumps of the world: the true politicians who believe this white-and-black issue, things are one way, there’s no gray, and that’s this guy, I think. 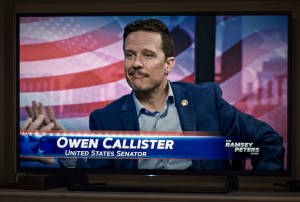 TVLINE | It seems a no-brainer for your character to return next season, when we’d likely get well into her presidential run. Have you had any conversations about that?
I think the idea is for her to run… I guess she would run for president the whole season, or hopefully she’d win at some point. Geez Louise, we want our heroes to win, you know? [Laughs] So I think the idea is for him to come back and be an adversary… I don’t mind playing the bad guy too to create a dialogue of some sort. You know, that happens. 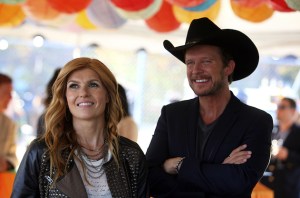 TVLINE | When you said that, I had a brief flash of Luke driving his truck through the wedding cake on Nashville.
If that’s as bad as Luke was, come on! [Laughs] So funny. Some people hated him!

TVLINE | No, he redeemed himself. He was Will’s champion in the end!
[Laughs] See? Luke came around.