In Thursday’s fraught Grey’s Anatomy, Jo at long last heard her origin story from her mother (guest star Michelle Forbes). Unfortunately, instead of give her closure, it appeared to open a Pandora’s box — one that left her pushing away even Alex. What the hell went down in Pittsburgh? Read on and find out…

‘I THINK YOU’RE MY MOTHER’ | After a brief opening in which Jo insisted that she wasn’t avoiding her husband, she just needed to pitch Bailey on a new grant for her fellowship before Alex’s term as interim chief ended the following day, “Silent All These Years” flashed back to her arrival on Vicki’s doorstep. As far as Jo could see, her mother was living in a modern-day Norman Rockwell painting: She had a beautiful home, nice husband, two kids, even a dog. But upon learning the identity of the stranger standing before her, Vicki was sorry she’d ever put out a welcome mat. Not about to give up, Jo suggested that they meet at a nearby diner. “One conversation,” she said, “and you will never hear from me again.” 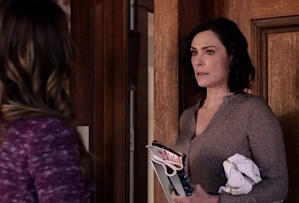 Back, in the present, Jo escorted to the ER a woman named Abby, who she quickly realized hadn’t, as she claimed, smacked her head on a cabinet. Now, rather than toggle between past and present the way the episode did, let’s go through this story in order first, shall we? Then we’ll join Jo for that fateful cup of coffee with her mother. So, the more Jo examined Abby, the more injuries she found. Teddy reported that the patient would need surgery but ordered Dahlia to have the O.R. readied without an antibiotic prep; Abby’s wounds were consistent with sexual assault, and Altman wanted to give her time to say as much before any evidence was erased. When Abby admitted that someone other than her husband had hurt her, Jo pressed her to let them gather evidence, which could remain sealed until she decided whether she wanted to file a police report. 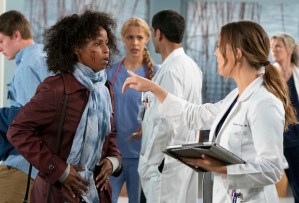 ‘ONE DAY, YOU MIGHT WANT JUSTICE’ | Abby balked at the idea of filing a report. For what? she asked. So that a jury of her peers could determine whether the tequila she’d drunk after fighting with her husband over the laundry had meant she was asking for it? Ultimately, Jo was able to sway Abby by telling her about her past with Paul and assuring her that her husband didn’t have to know they’d done a rape kit. When at last Abby was wheeled into surgery, DeLuca helped assure that the path to the elevator was a man-free zone; in fact, all of Grey Sloan’s female staff had been recruited to line the hallway in a show of support.

While operating on Abby, Teddy told Jo that the way she’d spoken to the patient had not been protocol. But it wasn’t the scolding that Jo thought it was. “It should be” protocol, Teddy said. Post-op, Altman reported to Abby that her surgery had been a success, and her kit would remain at the hospital. “This is not your fault,” she added. “There is nothing you did to deserve this.” Though Abby feared if her husband knew about the rape, he’d only see her as a broken person, Jo reassured her that she was a survivor. Again, Jo’s past with Paul resonated with Abby, and in the end, she reported the attack to the police with her husband by her side.

‘THE COFFEE HERE SUCKS’ | Now let’s flash back to Jo’s meeting with her mother… Jo was actually about to give up and leave the diner when Vicki finally showed up. After complaining that she was late for work — she tries to create jobs for underserved communities through the mayor’s office — she asked if this meeting was about money. “I don’t need your damn money,” spat Jo, who went on to admit that in her mind, she’d pictured her mom as a hard-luck case working at an even-worse diner. “That would make it OK that I left you?” asked Vicki. “I wanted you to have a better life than I could give you.”

Of course, Jo hadn’t had a better life… or even an OK one. “I lived in foster homes so bad, it was better to live in my car,” she said. And when a man had told her he loved her, she’d believed him, even when he beat her. At that, Vicki tried to leave. “Did you honestly come here to punish me?” she asked. “Consider it done.” No, Jo had come because she wanted to know something about herself that she couldn’t learn “from spitting in a tube.” So Vicki gave her a kinda half-assed backstory that prompted Jo to ask who her father was; she’d talk to him instead. 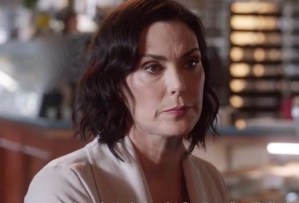 ‘HE WOULD NOT TAKE NO FOR AN ANSWER’ | “You can’t” find your father, Vicki told Jo. “He’s dead.” Motorcycle accident. Though if she’d had her druthers, “I would’ve preferred that he be eaten by fire ants.” And she wasn’t bitter, as Jo thought, because it hadn’t worked out with her childhood sweetheart; Vicki had been date-raped in college by a T.A. Nine months later, she’d had a baby, and then, “five days later,” she said, “I didn’t.” Despite the trauma Vicki had suffered, Jo remained angry. “You got therapy,” she pointed out. “You moved forward, and you didn’t once try to find me?” In response, Vicki explained that she’d hoped throughout her pregnancy that when Jo arrived, it would be just like in the baby books — her heart would crack open with a greater love than she’d ever known. And it had. It actually had. Nonetheless, Jo was a constant reminder of him, and “I resented you so much for it.”

So Vicki had done the best that she could for her daughter. Ha, said Jo. What would have been the best for her would’ve been if her mother had found an adoption agency and made sure she’d had a home, not dumped her at a fire station. “Of course you deserved better,” Vicki acknowledged. She just hadn’t been in her right mind, so “I didn’t have better to give you.” At that, Jo revealed something that she never had — that she’d had an abortion without telling Paul after he’d thrown her across the living room when she was seven weeks pregnant. She couldn’t raise a baby in all that fear and danger. “I did what I had to do,” she said. But when she reached out to touch Vicki’s hand, her mother pulled away. Before Vicki left, she answered a last question for Jo: Did she look like her father? No. “You have my father’s eyes,” said Vicki. “The hair is all mine… and maybe the fire in the belly.” Tearfully, Vicki apologized; she was still doing the best that she could.

‘DEAR LORD, I HAVE TO TALK TO MY SON ABOUT CONDOMS’ | In the hour’s only other plotline, Ben and Bailey learned that Tuck was “talking” to a girl he liked, prompting his dad to speak with him about consent. And as the episode drew to a close, Alex and Jo bumped into each other at the end of her rough day with Abby and his last day as chief. But she didn’t want to go out with him, not to talk or to celebrate Bailey’s return to her stressful job. “Can you just go celebrate with Meredith?” she asked. Alex couldn’t believe that his wife wouldn’t open up to him about Pittsburgh — he wasn’t going to judge; she knew that. “I can’t talk about it,” she told him. “I wanna go home alone… and sleep. Please.” And that was that, at least for now. So what did you think of Jo’s meeting with her mother? Was it at all what you’d expected? Hit the comments.