Wednesday’s episode of Pretty Little Liars: The Perfectionists unearthed a handful of dirty secrets, but the two biggest reveals were saved for the end of the hour… and had nothing to do with the show’s ongoing murder mystery.

Mona ended the episode by catching up with her old frenemy Hanna Marin. (Or is it Hanna Rivers now?) “How’s Caleb?” Mona asked. “How’s the baby?” (If you recall, we learned about Hanna being pregnant in the Pretty Little Liars series finale.) Then came the real surprise, which even Mona didn’t see coming: Spencer and Toby eloped!

When TVLine spoke with Troian Bellisario shortly after the PLL finale aired, she said she was glad that Spencer didn’t rush into an engagement. “Because of everything Spencer went through with her family, it’s more truthful for her to be at the beginning of something, tentatively moving towards being with Toby again,” Bellisario said. “If we had jumped to her instantly marrying Toby and running off with him, I don’t think it would have been true to the trauma she went through.” 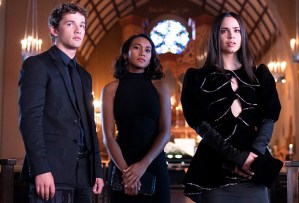 Since we’re already talking about tonight’s episode, let’s break down the biggest developments in the Nolan Hotchkiss murder extravaganza:

* Three days after Nolan’s death, Alison received a back-dated text from the deceased, asking her to meet him on the roof of Thorne Hall. Fearing that someone was trying to set her up (again!), she confided in Mona, who was busy blaming herself for Nolan’s murder. Her algorithm red-flagged him as a student who “could have pushed someone to the point of snapping,” but she didn’t bring that information to anyone’s attention, so she holds herself responsible for everything that happened.

* Caitlin’s ex-boyfriend Mason is back in the picture, and boy is he keeping a whole mess of handsome secrets. Not only did he “look a little too sad” at Nolan’s funeral, but he straight-up offered to lie about Caitlin’s whereabouts in case she needed an alibi. It’s like Mason doesn’t realize he’s a character on a Freeform murder mystery. (You can’t be so obvious, bro.)

* Officer Dana Booker, formerly the FBI agent who investigated Ava’s father’s financial shenanigans, is now Beacon Heights University’s head of security. After ambushing the gang at Nolan’s funeral, she pulled Ava, Caitlin and Dylan out of class to get their alibis for the night of the murder. Taking Mona’s advice to embrace her inner manipulator, Alison swooped in with a cover story for all three, throwing in a “Bring it on, bitch!” for good measure. We’re obviously not supposed to like Officer Booker, but she’s giving me major Detective Tanner vibes, so I’ll allow her to continue harassing our favorites.

* Speaking of harassment, why does Alison even bother locking her front door? She once again returned home to find someone waiting for her in the dark — Claire Hotchkiss, who just wanted to feel closer to her daughter Taylor. (Psst, she’s alive!) Claire explained that Taylor was always a happy overachiever… until she started teaching, at which point she became paranoid and delusional. Claire said that Taylor trusted no one, not even Nolan, but we know that to be a lie. Gee, what else could this shady lady be lying about?

Your thoughts on Pretty Little Liars: The Perfectionists‘ second outing? Drop ’em in a comment below.