Pretty Little Liars‘ series finale concluded with the long-awaited unmasking of its ultimate villain. And just like A.D., her portrayer was prepared for anything — even Internet backlash.

“You can’t satisfy everybody,” Troian Bellisario — whose character was revealed to have an evil British twin named Alex Drake (aka A.D.!) — admits to TVLine. “I’ve had to consciously remove myself from looking at people’s responses. As wonderful as it is when you get messages from people saying how much they like your performance, all you have to do is see that one person who’s like ‘This is stupid, I hate you’ and it’s gut-wrenching. Like, this is a story our creator came up with, and it’s my job to tell that story to the best of my abilities. So when someone says you were horrible, it’s hard not to take that in.”

Bellisario also notes that “with every other reveal on the show, it was OK if fans were upset, because everybody knew there would be more episodes with which to continue the story. This one is particularly divisive because it’s done after this. People are going to be left really loving it, or they’re going to have a bad taste in their mouth.”

Below, Bellisario further reflects on the big Alex reveal — including how she landed on that accent — and talks about Spencer’s “truthful” conclusion… or lack thereof.

TVLINE | Not only was this finale a huge undertaking, but so much of it hinged on your performance. I imagine that made for a high-pressure experience.
Oh, totally. When you show up on a set and you’re playing a new character, it takes a while to get into the rhythm and the heartbeat of that character. Usually, you have the opportunity to do auditions and callbacks and work on it, but with Alex, we had one episode with her. She had to spring into our eyes fully formed, and even though I got to play with her a little bit in the past, she was always impersonating Spencer. So I didn’t get to fully inhabit her until this finale. And it’s the last episode we’ll ever film, so to debut a whole new character in that environment was a trip.

TVLINE | It wasn’t until I heard Alex speak that it became real for me. How did you land on that specific dialect for her accent?
I really wanted to make her an Essex girl. Because she was going to have so many scenes with Wren, I wanted to make sure she sounded very different from him. If I just did a generic posh accent, it would be a little harder to hold onto. But if I was very specific, and I made her sound very different from [the other British characters], it’d be easier to tell that this is a living, breathing person from a specific place with a specific history. It was a little easier to take the turn because it was so sharp. Like, she wasn’t slightly British, she was fully over there. So that’s why it was important for me to work with a dialect coach to get a specific accent; she’s telling a whole story with the way that she speaks. 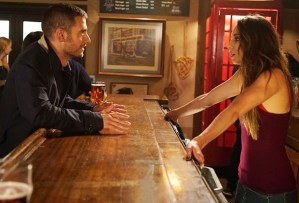 TVLINE | You mentioned Wren, so I have to ask: Did you and Julian Morris discuss all the stuff Alex did to him? I mean, she stole his sperm, killed him and turned him into a necklace.
[Laughs] Well, she didn’t steal his sperm. He had that one line where he said, “I even created life for you.” He was very aware and gave his sperm willingly to her cause. But even that’s very telling in terms of their relationship and what he was willing to do for her. Julian and I had spoken a lot about the couple, and we decided they were just this fire-and-fire couple. They were very tumultuous, possibly violent, but definitely passionate. It’s entirely possible that they could do these things to each other — that he could shoot her, and that she could kill him.

TVLINE | Marlene told me you guys only had Julian for one day of shooting. You did a lot with him, all things considered.
We did, and it was crazy. We actually thought he wasn’t going to be able to come at all, which was so scary, because he had been written into so many scenes. I think a lot of the scenes that ended up being between Alex and Spencer were originally between Wren and Spencer. I was grateful for what we got with him, but in a way, I was glad that those moments ended up being between the sisters. I really did want to have Alex be face-to-face with Spencer for a lot of the episode. It was my first time ever being purely Alex, and because we only had one day with Julian, I only had one chance to get it all right.

TVLINE | When you’re discussing your time on the show years from now, will you say, “I played Spencer”? Or will you say “I played Spencer and Alex”?
Well, I had years more time with Spencer, so if people recognize me on the street, they’re probably not going to yell out “Alex!” But Alex is also definitely a part of me. I’m so grateful that I got to play her in the last bit of the show.

TVLINE | Speaking of the last bit, Spencer was the only Liar who wasn’t either married or engaged by the end. How do you feel about that?
I liked it, because I thought it was really true. Because of everything Spencer went through with her family, it’s more truthful for her to be at the beginning of something, tentatively moving towards being with Toby again. Everybody else was married and building a family, which also makes sense. She was a little set back by what happened, and if we had jumped to her instantly marrying Toby and running off with him, I don’t think it would have been true to the trauma she went through.

Were you shocked by the Alex Drake reveal? Grade the series finale below, then drop a comment with your thoughts.