Fresh off last week’s embarrassing six-way lip sync battle, the ladies of RuPaul’s Drag Race decided on Thursday that they were really going to start trying from now on. No more tucking around!

Unfortunately, not everyone was able to keep that promise, as seen in this week’s disastrous mini challenge Why You Maddow Tho? The assignment was simple: dress up like MSNBC anchor Rachel Maddow (cheap jacket and all!) and read a series of breaking news reports from a teleprompter. Yet “simple” proved too much for some queens, like poor Silky Nutmeg Ganache, who struggled with the word “colonel” more than you’d expect from someone literally wearing two pairs of glasses.

In fact, the only truly good thing to come out of the whole challenge was Mercedes Iman Diamond’s completely unrelated tangent about growing up in Kenya: “Where I’m from, we didn’t have Rachel Maddow… but we did have a goat. I own a goat. Goats are so cute! Fainting goats are my favorite.” (Frankly, I’m a little disappointed that the editors cut Mercedes off when they did. What else did might she have said about goats?! I suppose we’ll never know.)

Scarlet Envy snatched up the mini-challenge win, which made her the defacto casting director for Trump: The Rusical, a song-and-dance extravaganza inspired by the life and times of holy-crap-I-still-can’t-believe-he’s-our-President Donald Trump. And because why not, the show was written in the style of Grease.

Some casting choices made perfect sense, like Yvie Oddly as Kellyanne Conway (“Yvie looks like the Crypt Keeper, so she had to be Kellyanne!”) and Silky as “Teen Angel” Oprah, even if Silky pitched a fit about not wanting to be typecast. Other choices, like Vanessa Vanjie Mateo as Rosie O’Donnell and Mercedes as Ivanka Trump weren’t as obvious, and neither queen put in the necessary work to make their characters believable.

In keeping with the Trump of it all, this week’s category was “Orange Alert,” sending the queens down the runway in all their Chester Cheetah glory. And some of them really turned it out: I loved Yvie’s nightmare clown costume, Plastique Tiara’s Madame Butterfly look and Brooke Lynn Hytes’ “Agent Orange” ensemble, to name just a few. And I don’t even have words for Shuga Cain’s sexy Trump getup (pictured above).

Ultimately, Silky — who stole the show was Oprah and served a stunning silhouette on the runway — emerged as this week’s winner, with Mercedes and Ra’Jah O’Hara left to battle it out to the tune of James Brown’s “Living in America.” Though both of the bottom two queens put in a good effort, Mercedes was sent sashaying away.

* I don’t know what’s crazier, that Silky draws her eyebrows on with a Sharpie or that she’s a registered Republican as part of a much larger plan to infiltrate the party from within.

* I was really excited about Tiffany Pollard’s appearance, and the former I Love New York star did not disappoint. I had to rewind and make sure she really asked if Brooke Lynn’s family is from “Norwegia” because she looks Norwegian. 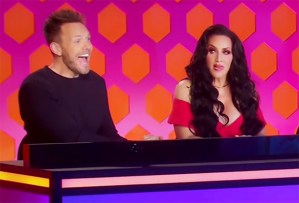 * And while we’re talking about this week’s guest judges, what was up with Joel McHale and Michelle Visage? Was that an act, or did she really want to murder him for screaming so much?

Do you think the right queen went home this week? Cast your vote below, then drop a comment with your thoughts on the episode.