Prepare to get the chills — big time. Early Wednesday, Netflix released not only the first seven episodic images from Season 3 of Stranger Things, it released the first full-length trailer, too. And. It. Is. Awesome.

Besides teasing a genuinely electrifying confrontation, showing us a monstrous new beastie (or at least a grody variation of the Mind Flayer) and giving us our first look at new cast members Cary Elwes and Jake Busey in action (as sleazy Mayor Kline and Hawkins Post reporter Bruce, respectively), the photos and video are a veritable spoilerpalooza. For starters, they suggest that, at least initially, Joyce and Hopper are still apart. They also reveal that the animosity that a jealous Jane initially felt toward Max has evolved into friendship, bully Billy has found the perfect job to flaunt his physique (lifeguard), and it’s a super mega bad idea to prank Dustin. (Poor Lucas… jeez!) 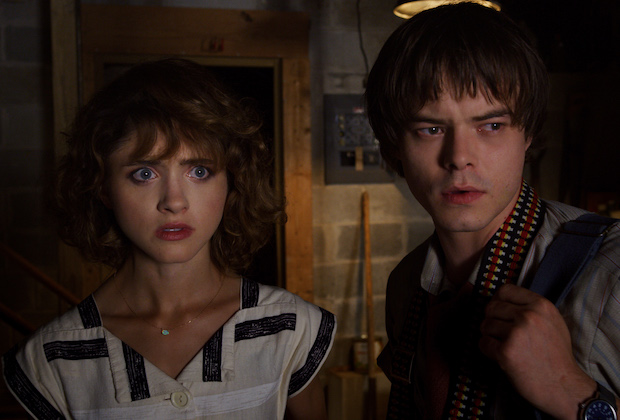 The trailer also hints at a future in journalism for Jonathan and Nancy, and tries to save us time wondering whether we should ‘ship Steve and his Scoops Ahoy co-worker Robin (Maya Hawke, the daughter of Uma Thurman and Ethan Hawke) by making it clear that yep, from the get-go, we totally should. “One summer can change everything,” reads the tagline. The only question is… how?

Press PLAY on the video above to check out the trailer for Season 3 (which drops Thursday, July 4) and, to take a peek at the photos, click on the attached gallery. Then hit the comments with your theories, hopes and fears.