This week’s Arrow spent its entire hour visiting various points in the future, up to and including the year 2040 where this season’s flash-forwards have been set. TVLine already listed the Qs we needed/wanted answers to, after so many months of teases, hints and misdirection. What answers did we actually get? 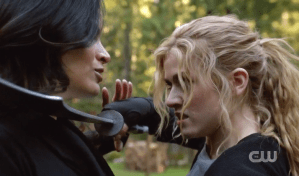 IN THE BEGINNING (OF THE FUTURE)… | Felicity gave birth to Mia at home, with Oliver at her side in a remote house in rural Bloomfield. From early on, Mia was trained by Nyssa — to the point that, as a teen, she could nearly best the LOA vet. (Her prize? Her very own bow!) We also learn that at this point, Smoak Tech is very much a thing, though Felicity works from home so as to stay on the down low. One day, Mia accidentally accesses a secret mini-bunker from which Felicity works on her “side” project, trying to expose a corrupt company. Mom and daughter get into a quarrel about vigilantism, and how Felicity refuses to sit back and do nothing. “Vigilantes are the opposite of heroes,” Mia rails. “Why should I believe anything you say again?” The lass packs a bag and makes track for Star City, to find her truth and purpose. Arriving in Star City, Mia gets a blackstar tattoo, to symbolize her feeling of being erased, like a star that burns out. Or something. 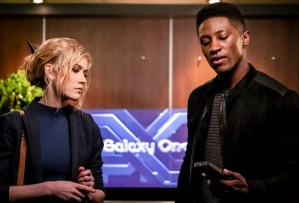 GLADES INVADERS | Now in 2040, Mia and William scale the wall that surrounds the Glades, with the mission of finding Felicity and getting her out. Meanwhile back in Star City, Dinah, Roy and Zoe make it their priority to track the bombs that have been planted. Leaning on one of Dinah’s old contacts, they learn that the ominous Eden Corps — using the megacompany Galaxy One as a front — paid the SCPD to fake Felicity’s death. Mia and William, following the coordinates gave them to Galaxy One, attempt to sneak in, but the former gets snagged by a DNA scan. Just then, Connor aka Knightwatch Agent Connor Hawke steps in to straighten things out for Ms. Smoak.

There’s some tension as Mia realizes Connor’s employment with the kinder, gentler ARGUS, and it becomes obvious that these two once had (or have been in the midst of having) quite a thing. They set it aside for now, as Mia and William set out to get a DNA sample from Galaxy One bigwig Dale, to use to access a sublevel where Felicity is likely being held. During their meeting with Dale, we learn that William’s company, Harris Consolidated, was launched with the help of an angel investor named City of Emeralds (which Mia later explains was surely Felicity’s handiwork). After procuring Dale’s DNA, they cut short the meeting and meet up with Connor who uses tech to convert the sample into a passkey to the sublevel. One elevator ride/wardrobe change later, Mia, with help from Connor, grapples with and KOs all the guards waiting for them. They then find and free Felicity from the cell in which she was being held.

GALAXY QUEST | Felicity is a bit irked that her kids defied her wishes and came to get her. And while there is a happy reunion with William, who harbors perhaps the bigger abandonment issues, Mia’s decidedly more chilly to Mom. Felicity explains that the coordinates weren’t supposed to lead to her but to the stockpile of bombs that Eden Corps plans to use to blow up Star City. Felicity refuses to leave until the bombs are disabled, and while William volunteers to join her, an indignant Mia hangs back. En route to the bombs, Felicity and William are joined by Dinah, Roy and Zoe, who got wind of the “Star City Reformation” scheme from Rene. Upon reuniting with Roy and Dinah, Felicity explains that she had to adopt the Calculator persona to infiltrate Eden Corps.

As Mia and Connor have some words (a la “Was any of it real?”), he tries to connect with her through the fact that he, too, had adoptive parents who were heroes, and as such were a bit absentee. Nonetheless, he was proud of them. That moves Mia to catch up to Felicity & Co. just as they realize the bombs are gone! Rene arrives to explain that the bombing of Star City is set for that night, and no, there won’t be any evacuations. To stop the bombs they must destroy the “fidget cube” that Dale carries around, so they attend a masked party, where they struggle to ID Dale in the crowd. When Mia finally does, she follows him into his office, only to be surrounded by about a dozen guards. Mia, though, is more than up for the challenge, outing the lights and then proceeding to kick every single one of their asses. Dale slips outside, but once he is re-located, Connor lobs Mia her bow and she fires an arrow across the party space and right into Dale’s cube, saving the day with just seconds to spare.

UM, WHAT HAPPENED TO OLIVER…? | In the aftermath, Mayor Rene delivers a speech blaming The Calculator, Arsenal and Black Canary for the party attack, placing a bounty on their heads. Afterward, Dale suggests Rene was sympathetic to his old friends and perhaps tipped them off. Rene convinces Dale otherwise, and then gets a look at the Galaxy One boss’ plan to take Archer global and eliminate vigilantes for good — and it’s some kind of helmet…?

After advising the team that they must stop Dale from taking Archer global (which would give Galaxy One more power than any one company should have), Felicity tries to smooth things over with Mia, who spent years hating vigilantes because of her mother. Mia, turning sympathetic, says she can’t imagine having an entire city turn on her mom, and turn on Dad. A proud Felicity remarks that the Mia she has seen in action is “so badass,” just like her father. When Mia notes that Felicity’s beef with Galaxy One seems personal, she asks if it has to do with “what happened to Dad”?

“No,” Felicity answers. “That one is on me.” As we cut to the present day, where Felicity is excitedly taking the beta version of her Archer program online….