Sunday’s American Idol — the seventh and eighth hour of auditions for those of you keeping score at home — brought back two more former contestants. (Step aside, Laine Hardy!) But which one scored a golden ticket to Hollywood?

To find out, let’s break down the night’s 11 most memorable auditions… 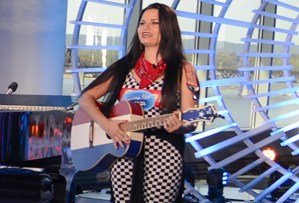 JESSICA WHITELY, 26 | After delivering a “Yikes”-inducing audition seven years ago, this Ohio native returned for another shot at stardom, performing an original song called “Idol.” It was… not good. When asked to drop her guitar and perform a cover, she chose Katy Perry’s “The Box,” a relatively obscure song from 2006 that you can watch here. I’d never heard this particular Katy cut before, so I didn’t realize how badly Jessica was performing it until the songwriter herself chimed in: “That’s not exactly how it goes,” Katy said, “but I loved the interpretation.” In the end, I agree with both of the judges’ rulings: Jessica isn’t proceeding to Hollywood, but her voice teacher deserves a huge career for the work she’s done.

JACOB MORAN, 24 | This beautiful soul comes from a musical family and has spent his entire life singing, a talent he also employs in his job at a Michigan nursing home. I knew we were in for something special when he stepped into the audition room, but I was not prepared for his (at times almost Michael Jackson-esque) take on Ariana Grande’s “Into You.” Those runs! Stunning! Luke Bryan said he’s “right there” with Rascal Flatts’ Gary LeVox.

ALYSSA RAGHU, 16 | Unlike Sunday’s first contestant, you probably do remember Alyssa — or as Katy thinks of her, “my sauce!” — who made it all the way to the Top 24 last season. At the time, Katy told her she had a “forgettable” sound, which Alyssa remedied with voice lessons, dance classes and more than 200 live performances. (If she doesn’t go further this time, it certainly isn’t for lack of preparation.) “I didn’t come this far to only come this far,” she told the judges before diving into a solid rendition of V V Brown’s “Shark in the Water,” best known — by those with refined taste in television — for its use in an iconic Degrassi: The Next Generation promo. I was really impressed with how much control Alyssa has over so many different parts of her voice. She also remained confident throughout the performance, but never once overdid it. 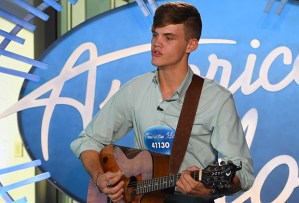 COLBY SWIFT, 19 | I’ll admit, I often have mixed feelings about people who share my last name. Like, do I want them to succeed, thus elevating the Swift name to further greatness? Or does their success drop me to a lower rung on the Swift ladder? In the case of this particular tall drink of water, I’m rooting for Colby, whose super-country performance of Cody Jinks’ “Cast No Stones” had the judges torn.  In the end, I think Luke really saw a young version of himself in Colby and just couldn’t let him go. (As an aside: I sure hope Colby’s no-good mother, who walked out on her family when he was just 10 years old, was watching tonight. Or at least watches it on Hulu tomorrow.)

EVELYN CORMIER, 19 | Just when I thought I’d heard every conceivable variation of Chris Isaak’s “Wicked Game,” along came this teenage newlywed with yet another. There was something so special and memorable about her tone, which bore the maturity of someone at least twice her age. And the fact that she’s a part-time music teacher made a lot of sense in terms of her vocal choices throughout. Katy called it, “literally one of my favorite voices I’ve ever heard in my life.” Literally.

ASHLEY HESS, 27 | This dental hygienist, whose favorite color is either yellow or gold, has one of those smooth, effortless voices you could just sit and listen to forever. In fact, the judges were so into her performance of Norah Jones’ “Don’t Know Why” that they stopped her midway through so they could pull their chairs up to her piano for a closer listen. (Side note: The little snippet of “Don’t Know Why” that Katy half-sang sounded really interesting. Can I get a full studio cover please?) 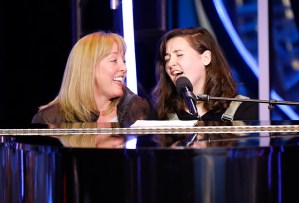 GABA, 19 | After blowing the judges away with a bombastic performance of Adele’s “All I Ask,” this Los Angeles-based student brought out someone special for an unforgettable duet. As Gaba explained, she was born through an anonymous egg donation from someone she recently met for the first time. At the judges’ request, Gaba’s egg-mother joined her for a harmonious performance of Sara Bareilles’ “Bright Lights and Cityscapes.” (My heart!) Gaba obviously made it through to Hollywood, but Luke encouraged her to add a little “grit and growl” to her voice. (Personally, I got more of a musical theatre vibe from Gaba, but that could have just been the style of song she chose to sing.)

PEACH MARTINE, 16 | Did American Idol just become a sci-fi show? I only ask because this Miami Beach teen is 100 percent a robot. She even programmed her voice to sound like the late Dolores O’Riordan for a performance of The Cranberries’ “Zombie.” She may have overdone it with the “eh, eh, eh”s — to the point where Luke thought he was trapped in a reverb chamber — but it wasn’t terrible. The judges saw enough potential to ask for a second song, an original number that was (dare I say it) kind of great. I agree with Lionel that there’s something “fun and sellable” there, but I also agree with Katy that Peach isn’t quite ready. I guess we’ll find out in Hollywood.

DALTON ELLIOTT, 26 | This Virginia construction worker put his musical dreams aside to focus on his baby boy, a relationship that has ironically made him a better musician. When Dalton sang Lee Brice’s “Boy,” I felt like he was singing directly to me, possibly while rocking me to sleep in front of a raging fireplace. (Too specific?) Even more than having a great voice, Lionel commended Dalton on being a true storyteller, something all great musicians strive to become. 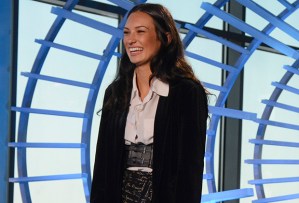 KATIE BELLE, 19 | I really wanted this Atlanta resident to have a great voice, mostly because she has the perfect name for it. I also support her dream of saving the ocean. (Yay, fish!) I was skeptical when she said she was singing Jennifer Hudson’s version of “Golden Slumbers,” but all my doubts faded away when I heard Katie’s soft, beautiful voice. It’s like the vocal equivalent of taking a nap on a pile of clean laundry. (Did I just become a cat?) Anyway, I’m, a fan.

LAUREN ENGLE, 27 | “No matter what you go through, there’s always a light at the end of the tunnel.” That’s the mantra of Sunday’s final contestant, a 27-year-old widow who performed a song she wrote for her late husband. Titled “Compass,” it was a timeline of their life together — and it gutted me. Though I always get worried about people who audition for American Idol because they’re looking for their “purpose,” I wish nothing but the best for this powerful, admirable woman, who also went through to the next round.

Which of Sunday’s auditions did you enjoy the most? Weigh in via our poll below, then drop a comment with more of your thoughts.