After endearing himself to the judges last season, a fan-favorite contestant is heading back to Hollywood for another shot at stardom — and that was just one of several surprises from Sunday’s American Idol.

The third night of auditions this season also included what Lionel Richie called “the attack of the 15- and 16-year-olds,” an onslaught of insanely talented teens: There was Austin Michael Robinson, 15, dubbed the “country Justin Bieber” by Katy Perry; Riley Thompson, 16, dubbed the “country Lana Del Ray” by that same judge; Mica Giaconi, 16, who did Bob Marley proud with a cool cover of “Is This Love”; and Darian Baena, 15, who surprised the judges with a bilingual version of “Angels.”

But the most talented of the teens was Madison Vandenberg, 16, whose performance of Dan + Shay’s “Speechless” left the judges just that. She had one of those voices that’s so inexplicably good, you swear it must be auto-tuned. I also loved that both Katy and Luke Bryant compared her to Kelly Clarkson. (Am I imagining it, or have a lot of contestants already been told that they’re the next Kelly this season?)

OK, time to break down the rest of this week’s stand-out auditions… 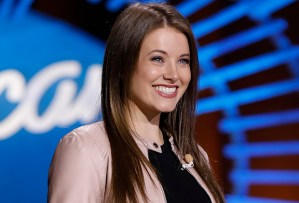 ASHTON GILL, 20 | The first audition of the night included a twist as exciting as it was predictable. From the moment Ashton said that she was bringing her childhood friend Laine Hardy — yes, the Laine Hardy who made it all the way to Hollywood Week last season — to play guitar for her, I knew he’d end up rejoining the competition. And sure enough, he followed Ashton’s crystal clear performance of Chris Stapleton’s “Broken Halos” with a “surprise” audition of his own. “He got good!” Katy remarked before joining Laine and the other judges in a group performance of “The Weight.” (Katy also had a lot to say about Laine’s new teeth, though I think the real conversation we need to have is about him wearing a hat with his name on it.)

JAKE PULITI, 20 | There are three things you should know about Jake: First of all, he is not a snowboarder. Second, he does not play football. Lastly, he is a singer. Now that we’ve gotten that cleared up, let’s talk about his fun take on Montell Jordan’s “This Is How We Do It.” It was so fun! And he deserves bonus points for not getting distracted by Katy literally dropping to the floor in front of him and breakdancing.

SHAWN ROBINSON, 21 | Some contestants are impossible not to love, and Shawn — who currently works in the garden department of a hardware store — was one of them. He radiated positivity from the moment he stepped in front of the judges, and that inner light shone through clearly in his performance of Jessie J’s “Who You Are.” The judges couldn’t get over his buttery voice and overall “precious”-ness. (Do you think he sings to his plants?!) 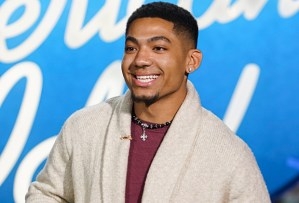 NATE WALKER, 18 | This Pittsburgh teen grew up singing in church with former Idol finalist Gabby Barrett, who made a quick appearance via FaceTime. “There’s something in the water in Pittsburgh,” Katy declared after Nate’s run-derful take on “Say Something,” a smooth performance from a smooth individual.

WADE COTA, 27 | Katy was completely blown away by Wade’s “baby bear cub” growl, calling it “one of the most unique voices I’ve ever heard in my life.” His performance of George Ezra’s “Blame It On Me” was made even more inspiring by the stories he shared from his abusive past — even if I feel like Idol might be milking the emotional backstories a little too hard this season.

PETER LEMONGELLO JR., 19 | As the son of the first man to sell 1 million records on television (and who possibly also invented infomercials?), this young crooner had some big shoes to fill. And while it was clear from the moment we met Peter that his ’50s aesthetic wouldn’t gel with Idol‘s current vibe, I was still curious to see what he had to offer. His performance of The Four Tops’ “I Can’t Help Myself” was exactly what I expected/hoped it would be, down to the dance routine. (I was also impressed at how many names Peter was able to drop in such a brief audition. Do you think all of his friends are jealous of how close he is with Chubby Checker?)

CLAY PAGE, 24 | Dubbed the “gentle ginger” by Katy, this Georgian gentleman shared a sad story about losing the uncle who inspired him to pick up his first guitar, then treated the judges to a Thomas Rhett jam. Luke said that Clay might not be the best country singer in the world (duh), but he still hung onto his every word.

DRAKE MCCAIN, 17 | The phrase “spiritual experience” has already been used this season, but Drake’s audition — which turned into a full-blown gospel fest — took that to a very literal place. I loved when Katy joined added her voice to “His Eye is on the Sparrow,” resulting in an impromptu duet that brought Katy back to her roots as a Christian musician. (Hey, spending enough time in our nation’s heartland will do that.) 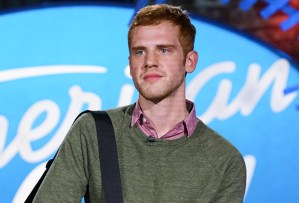 JEREMIAH LLOYD HARMON, 25 | Despite this week’s onslaught of teens, the episode’s best audition came courtesy of Jeremiah, a preacher’s kid who currently works as a janitor at his father’s church. The unassuming songwriter came prepared with an original piece called “Almost Heaven,” a soulful ballad about reconciling his sexuality with his faith. Aside from the obvious emotional connection the judges formed with Jeremiah, they were also impressed with his musicianship, something that will serve him well in the group rounds.

Your thoughts on Sunday’s Idol auditions? Vote for your favorites (up to three) in our poll below, then drop a comment with your full review.