James’ fate may be hanging in the balance on Supergirl, but we’ve got some news that should give you a little hope. Azie Tesfai, who makes her recurring debut as James’ sister Kelly Olsen on the CW drama this Sunday (8/7c), will be a full-fledged series regular next season, TVLine has learned. 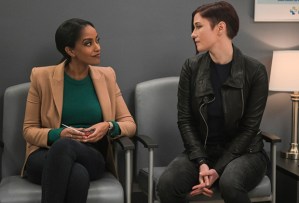 And although things may not have worked out between Kara and James, let’s just say that a Danvers-Olsen romance may still be in the cards. (That hint not big enough for you? Perhaps the photo to the right will help.)

Of course, Kelly isn’t the only estranged sibling making a big debut on Sunday. Appropriately titled “O Brother, Where Art Thou?”, the episode also introduces Jon Cryer as iconic DC Comics villain Lex Luthor, brother of Lena. According to the official logline, Lex has been “secretly furloughed from prison due to failing health,” prompting him to visit Lena “to seek her help finding a cure. Savvy as ever, Lena is suspicious of Lex’s motives but when she’s faced with a life and death situation, she must decide how she truly feels about her brother.”

Supergirl was recently renewed for a fifth season, along with nine other CW series. Your thoughts on Supergirl‘s latest addition? Drop ’em in a comment below.