Sunday’s episode of The Walking Dead not only introduced a new threat to the Kingdom (the most dreaded of all varieties of pirates — land pirates!), it teed up an epic brawl (between Daryl and Beta) and suggested that one of our favorite characters might soon be hitting the road with some newer, less beloved characters. Who was contemplating pulling a Maggie? Read on… 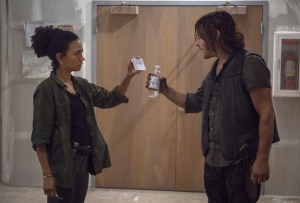 ‘YOU MADE MY MOTHER LOOK WEAK’ | As “Chokehold” began, Daryl, Connie, Dog, Henry and Lydia were still fleeing from the massacre they left behind at the Whisperers’ camp in “Guardians.” For his part, Daryl was even grumpier than usual, having learned just how much the girl had rounded down her group’s numbers. Because of that lie, it was too great a risk to go back to the Hilltop. Henry suggested that he and his crush run away instead; Alpha couldn’t hold the Hilltop responsible for taking Lydia if they just vanished. No way, said Daryl. “Think of your mom.” While Connie led the fugitives to what looked like an under-construction apartment building (at which she’d stashed some supplies when she’d stopped there once upon a time with Kelly & Co.), Beta assembled a search party to go after them. The following day, Team Daryl decided to clear enough barricades in the building for the Whisperers, but not the walkers, to make their way upstairs. Upon hearing from Lydia that Alpha wouldn’t send an army, just Beta, her fiercest warrior, Daryl was pleased. “Good,” he grunted. “Kill him first.”

As the fivesome prepared to do battle, Daryl and Connie argued about what would happen to Lydia afterwards. They couldn’t take her back to the Hilltop, he argued. If they did, their friends would be killed. “We have friends, she doesn’t” Connie angrily scribbled on her notepad that never runs out of paper even though she only ever writes like three words on a page. Nearby, Lydia got Henry to admit that he’d come after her because (duh) he cares about her. (And he’s too shallow to see what a catch Addy is.) When at last the Whisperers arrived, Beta could tell at once that they were being invited to lurch into a trap; this didn’t deter him in the slightest. Upstairs, Daryl stashed Lydia in a closet with Dog. Since she wouldn’t kill “her” people, she was just gonna get in the way. In the ensuing melee, Henry was injured fighting like his (love) life depended on it, and Lydia broke out of her hiding place to help. Or, well, to let Dog help. Overall, Daryl, Henry, Connie and Dog did a fine job of dispatching the Whisperers. Beta, on the other hand… he threw Daryl around like he was a ragdoll and pulled a knife out of his chest like it was a splinter. And not for nothing, but I haven’t seen anyone break through that many walls since the Kool-Aid Man. “All I want is the girl,” he told Daryl. But, rather than hand over Lydia, Daryl sent him plummeting down an elevator shaft a la Rosalind Shays. 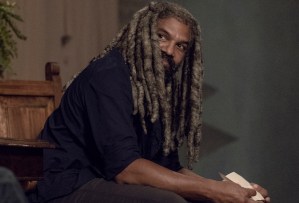 ‘THESE PIRATES HAVE THEIR KNIVES AT THE KINGDOM’S THROAT’ | Meanwhile, at the Kingdom, Carol had no sooner gotten out a line about how maybe the fair would come together just fine when Jerry and Dianne reported that, while they’d been out clearing walkers off the path to their community, they’d been jumped by some pirates called the Highwaymen. The baddies took the Kingdommers’ armor — even Jerry’s sword, the fiends! — and sent them home with a list of goods that Ezekiel would have to hand over as a toll to use “their” roads. Unfortunately, “we couldn’t pay these pirates if we wanted to,” lamented the king. So the four of them rounded up as many fighters as they could and trotted off for a confrontation. Upon seeing that the Highwaymen’s guards had guns, Carol suggested talking to them rather than attacking. What gives you the idea that that could possibly work? Ezekiel asked. “They sent a grammatically correct letter, for crying out loud,” she replied.

Upon entering the Highwaymen’s lair, Ezekiel and Carol began trying to negotiate with their leader, a kind of a cross between the Marlboro Man and a Union soldier. But as soon as it became clear that the Kingdom wouldn’t be getting EZ-Passes anytime soon, he had his henchmen draw their weapons: Maybe Ezekiel’s subjects wouldn’t be so reluctant to pony up for his and Carol’s safe return. Aha — but the “royal couple” had had a plan all along. Quicker than you could say, “Gotcha!” the Highwaymen were surrounded by all those fighters that had come from the Kingdom. A deal would still be struck, though. The Marlboro Man laughed at Ezekiel’s offer to hire the Highwaymen to protect the roads to the fair in exchange for access to it and the Kingdom. “You’re gonna have to do better than that,” he said. So Carol did: “When’s the last time any of you have seen… a movie?” she asked. Miraculously, that swayed the pirates, who then rode into action and helped Tara and a contingent from the Hilltop fight off walkers while their path was blocked by a fallen tree.

‘THERE’S A WHOLE WORLD OUT THERE’ | As the hour drew to a close, Tara and the Hilltoppers arrived at the Kingdom with their escorts, and Tammy Rose let Earl know that they weren’t actually there to find younger parents to adopt the wee Whisperer for whom they’d been caring. After they’d fought off walkers on the road to protect the tyke, “I’m not letting go of this baby,” she told her husband. Soon, Carol and Tara realized that Daryl and Henry had never arrived and began to worry. Where were they? Still back at the construction site. Daryl announced that they’d take Henry to the closest community — Alexandria — to get patched up, then they’d just keep moving… all of ’em, even Lydia. (At this point, does anyone not assume that Connie will be Daryl’s first love interest?) There was just one problem with Daryl’s plan: Beta, being much tougher than Rosalind Shays and having taken a much shorter fall, wasn’t dead. He’d just had the wind knocked out of him.

So, what did you think of “Chokehold”? Daryl and Beta’s smackdown? (And wouldn’t Daryl have made sure his nemesis was dead?) First impressions of the Highwaymen? Would Daryl really split with Henry & Co.?