Apparently never having heard the saying “Be careful what you wish for!” The Walking Dead’s Henry chased after Lydia in Sunday’s episode, only to get for his troubles something far worse than even a kiss that leaves a wormy aftertaste. (And you thought you were nervous meeting your girlfriend’s mother!) Meanwhile, Michonne was asked to reconsider her stance on both Negan and the much-ballyhooed fair, and actually did adjust her attitude toward one of them. Which? Read on. 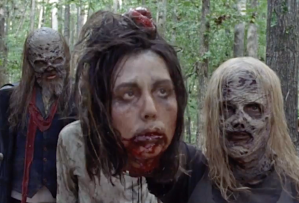 ‘EYES OPEN — WHERE THERE’S ONE, THERE’S MORE’ | As “Guardians” began, Alpha pumped Lydia for intel on the Hilltop but got only what she called “excuses, wasted words,” which made the girl wonder if information was the only reason her mom had broken her rule to retrieve her. “What a stupid question,” said Alpha, clearly under the impression that she might still have a shot at Mother of the Year. Later, the Whisperers’ leader overheard a couple of her minions bitching about the danger she’d put them in, and Lydia found a yoyo, off which she pulled the string. I got the impression — mind you, it was only the impression — that the toy had been left for her by Henry, who was soon caught lurking by Alpha’s second in command, Beta (Sons of Anarchy’s Ryan Hurst). Anyway, as the Whisperers resumed their trudge toward their extremely well-populated camp with Carl 2.0 in tow, Alpha made it as plain as the mask on her face that she suspected Lydia was lying about her stay at the Hilltop.

Once Henry was tied up at Camp Whisperers, the boss lady did some speechifying to answer a question he hadn’t asked: Why did they dress in walker drag? Because “the strong adapt, the weak die, like nature intended,” she said. At that, the guy from the gossipy couple piped up, asking if that’s what rescuing Lydia had been, “you letting the weak die?” In no time, he was challenging Alpha’s leadership. Only she knew that Lady MacBeth had been putting ideas in his head, so rather than fight the man, she beheaded his terrified girlfriend with a wire. (Or was it yoyo string? Wait, have the Whisperers weaponized yoyos?!?) Next, she gave the detached noggin to the guy and fatally stabbed him, setting up a horrified Henry for decades of therapy he’d never receive. Later, while Lydia made sure that her crush saw her hide a medallion in her shirt — Was it hanging from yoyo string? I have no idea with these two! — Beta advised Alpha to find out whether her daughter had feelings for Henry. So that evening, Alpha ordered Lydia to kill the boy, or she’d kill them both. Lucky for the youngsters, before Lydia was forced to act, walkers attacked the camp, and Daryl and Connie showed up to spirit the kids away to safety. 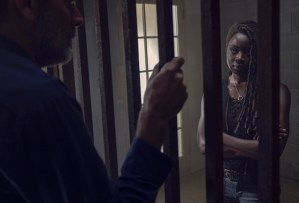 ‘WE CAN’T BE SO WORRIED ABOUT FINDING ENEMIES THAT WE LOSE OUR FRIENDS’ | While all that was going on, back in Alexandria, Michonne tore the council a new one for keeping things from her (like Eugene and Rosita’s ill-fated mission to set up a radio relay). Aaron, still reeling from Jesus’ death, had Michonne’s back. But Gabriel and Siddiq argued that the council’s vote no longer had any meaning since, as security chief, Michonne was allowed to unmake every decision. In particular, Siddiq was upset that Alexandria wouldn’t be attending the Kingdom’s trade fair. The situation there was worse than Ezekiel had let on, Carol had told him. But, though Michonne was willing to take in the Kingdommers if need be, she refused to risk Alexandrians’ lives just to help out their friends by going to their fair. Off that frustrating meeting, Gabriel returned home to find Rosita ready to sweetly give him an out. “If [me being pregnant is] too much and you wanna walk,” she suggested, “I get it.”

Shortly, Gabriel was visited at the church by Eugene, who, despite his own infatuation with Rosita, offered up not one but two charts indicating the pros/cons of the preacher standing by the mother-to-be. Any way you sliced it, though, “Happiness shows a definitive growth pattern when projected over the longterm,” Eugene noted. “But I’m not the father,” Gabriel pointed out. Big deal. “You love each other, you stop wasting time,” Eugene said. “It’s all we have in the end.” (And by the episode’s conclusion, it appeared that Gabriel was taking Eugene’s sound advice.) Nearby, Michonne paid a visit to Negan’s cell, where the Saviors’ former boss man argued that he had changed. So “if you’re not gonna kill me, then maybe you could learn to trust me a little bit.” When she got done laughing in his face, he suggested that he’d heard things, thanks to his window to the world. And it seemed to him that the good thing that she had going in Alexandria was slipping through her fingers. “If this is why you came back” after escaping, she scoffed, “you shoulda stayed out there.” 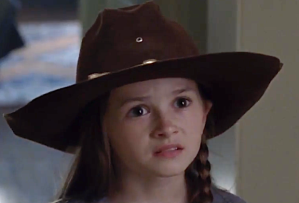 ‘IT’S A TERRIBLE IDEA’ | At home, Michonne got Judith to admit that she’d been chatting with Negan. He’s not your friend, Michonne said, aghast. “Well, obviously,” replied the little girl, always an episode highlight. In no time, they were fighting over whether Negan was a monster or a human being. He’s killed people, Michonne argued. If he were to be let out, he’d kill more people. Except that he did get out, Judith noted, and he hadn’t hurt anyone. “People don’t really change,” said Michonne, prompting her daughter to give a response so perfect that it got her sent to her room: “You did.” Off that heated conversation, Michonne went to Aaron and Gracie’s to give him a heads-up that if the council voted to send a delegation to the fair, she wouldn’t veto it. “I think it’s a terrible idea,” she admitted, “but the people can weigh the risks and choose. That’s the charter they agreed to.” And in the last seconds of the hour, it was clear that such a vote had indeed taken place: The Alexandrians were loading up for the social event of Season 9.

So, what did you think of “Guardians”? Hit the comments.