For The Gifted‘s Season 2 finale, you may recall show boss Matt Nix telling TVLine that he penned an episode so big, “Production was basically like, ‘This is impossible. I don’t know what you were thinking, you shouldn’t have written this.'” Nix, though, assured everyone, “We will figure out a way,” and the result was a power-packed showdown between the Mutant Underground and Purifiers, Frosts and eventually Reeva herself. 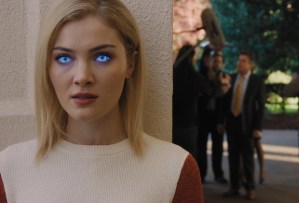 CoSA VFX “eyed” the Frosts for the finale, building off groundwork laid by Spin VFX

But among all the whiz-bang visual effects on display in any given episode of the Fox/Marvel drama, we had to wonder: Which come with the biggest price tag? Like, does it cost more for Marcos to shoot light from his hands than for Lauren to lob a semi-translucent shield?

Mild spoilers for the Season 2 finale appear below.

Nix didn’t have an “a la carte” price sheet handy when we spoke to him, but he did offer some perspective on which visual effects crush the budget hardest. 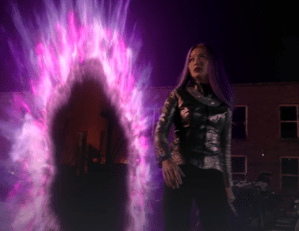 Filed under Very Expensive, as you might imagine, are the Frost triplets, played by series regular Skyler Samuels with a significant assist from stand-ins Amber Erwin and Rebecca Ray.

“Whenever you have the Frosts walking around, you’ve got to shoot the same actor three times, sometimes crossing in front of each other, and you have to [light up] all the eyes [when they use telepathy]…. That’s a thing,” Nix affirms. “One shot isn’t crazy, but usually there are lots and lots and lots of shots.” 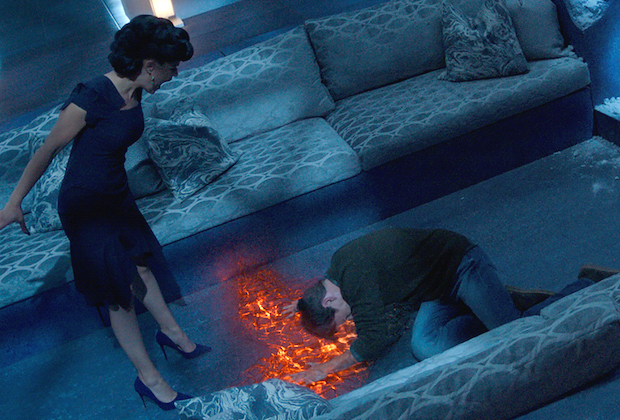 But when it comes to hard-to-pull-off powers, The Gifted may have saved the biggest for last, as Strucker family patriarch Reed (Stephen Moyer) invited his latent mutant ability to manifest itself, rendering his slightest touch incredibly destructive.

“Reed’s power requires tracking his arm, and in [the finale] his hands, face, everything he touches,” as they glow with unstable energy, Nix explains. But the real trick comes once things start a-crumbling. “For every shot, you’ve got to do all of the digital stuff on his body, and then you also have to do practical things” using non-digital effects,  “because he’s not touching nothing,” Nix says. “If he’s touching a wall and the wall crumbles, you have to have a wall there and then you have to have a crumbling wall there, so there’s a lot going on.”

All of which makes Marcos’ aforementioned light beams seem like small potatoes, arguably a suped-up version of the original Star Trek‘s phaser blasts. Meaning, in the scheme of things, “Not that hard!” says Nix with a laugh.

Which of The Gifted‘s tricks do you think have been niftiest?