Fox’s The Gifted will wrap Season 2 with a finale that ran the risk of perhaps being a little too grand.

Meaning, if you are among those who felt that recent episodes have somewhat lacked mutant-powered punch, this Tuesday’s episode, titled “oMens,” promises to make up for that. And then some.

“It’s a big season finale,” showrunner Matt Nix shares with TVLine. “This is the first episode where [production] was like, ‘We have to do a meeting where everyone comes and sits there for a full hour approving effects, all meeting long,’ because there was just so much.

After first laying eyes on Nix’s script, “Production was basically like, ‘This is impossible. I don’t know what you were thinking, you shouldn’t have written this,” he recalls with a chuckle. “I was like, ‘Everybody breathe. We will figure out a way.'”

“It’s crazy, it was so big. And very heartbreaking,” says Emma Dumont, who plays Lorna. “Matt wrote, like, a two-hour episode, and we only had 44 [minutes] and change, so we’ll see how that goes! But yeah, a lot happens.” 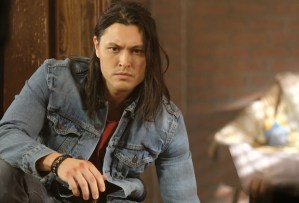 Setting the stage for the finale, Lorna and Andy have rejoined the Mutant Underground after learning of Inner Circle leader Reeva’s plan to make the infamous “7/15” terror event look like small potatoes, by dropping entire governmental buildings. Clarice remains missing after getting shot and tumbling into one of her own portals to heaven knows where, and as a result Johnny’s powers are a bit on the… blink. Meanwhile, Strucker family patriarch Reed is struggling to control his unstable power, after destroying a Purifier with his bare hands.

As those storylines come to a head on Tuesday at 9/8c, “There’s a lot of tragedy… and a lot of hope,” says Nix. “And some big stuff happens that made people cry on the set.” Caitlin’s portrayer, Amy Acker, concurs, warning, “There’s gonna be some tears. Maybe a lot.”

“It’s a real mine field to not give away all our secrets…,” smiles Skyler Samuels, who plays Frost sisters Esme, Phoebe and Sophie. “But there are some big, ‘Holy s–t!’ moments — hence the tears.”

“Blair [Redford] has been using the word ‘tragic,’ and I feel like I would also use that word,” Samuels continues. “It gets a little heavy, and then it definitely takes a turn for the interesting.” 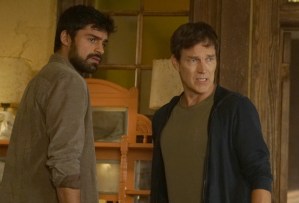 “There is 100-percent a cliffhanger, but it’s not what people think,” Dumont teases. While season finales typically leave a life or lives in jeopardy, “This cliffhanger is not that simple.” Instead, she says the final moments will introduce a new element to the on-the-bubble Marvel series.

Of the possibilities, Dumont offers, “Maybe a new dimension? Maybe a new world? Maybe a new faction? Maybe a new comic book character?” Whatever the case winds up being, “Literally, it’s the craziest twist,” she avows. “We were all shocked, like, ‘What is this?'”

All told, Dumont echoes Nix’s words above, saying that Season 2 has “a pretty traumatic ending, but one that is also very hopeful.”