The following post contains major spoilers for Friday’s episode of The Blacklist. (Need to catch up? Read our previous Blacklist recap here.)

It seems Raymond Reddington should have watched The Shawshank Redemption once more before attempting his own jailbreak.

Though “failure” is not a word often used to describe Red’s schemes, his attempt at escaping from prison during Friday’s Blacklist was, in the end, an unmitigated disaster. Just as he was walking out of the prison doors (having masterfully disguised himself as the facility’s warden), Red was captured by numerous guards and locked up once again.

To add insult to injury, Red’s escape plan would have gone smoothly, had he alerted Liz to his strategy. But he decided to hide his escape plans from her, prompting Liz to worry that Red was in trouble — and when she arrived at the prison to check on him, she inadvertently foiled his getaway.

Earlier in the episode, Red had pleaded guilty to the (many) remaining charges against him, and he was sentenced to death by lethal injection. But Red had only surrendered because he was hatching an escape plan in his spare time, and he assumed he would ultimately evade his death sentence before authorities could take him. Having blown his one chance at escape, though, Red now faces the very real possibility that he’ll actually be killed — and the only person that can help him is someone he’s dubbed “the man in Cairo,” whom Liz has been tasked with locating.

TVLine spoke with series creator Jon Bokenkamp for some insight on Friday’s episode, including the impact it will have on Red’s mental state moving forward. Read on for his thoughts.

TVLINE | First, I want to talk about those prison escape scenes, which were so complex but really fun to watch. What was the process for writing and filming a sequence like that?
We just wanted to do something that was less The Great Escape and more of a fun heist. It’s sort of a ridiculous plan, but much like Reddington, it’s so ridiculous, it almost works, you know? [Laughs] We liked the idea that Red could lean on some of the people he’s befriended [in prison], whether that’s Vontae or Vega — who, at one time, was an enemy and wanted to try and kill him — and that he’s working the system. One of the most fun things about the show is when Red has a plan and the audience doesn’t yet know what it is. Watching that plan unfold, I hope, was fun — and it came close to working. But we just wanted to do something that was unusual and slightly grounded and a lot of fun. And we’ve talked before about the secrets that [Red and Liz] are keeping. Had Reddington been upfront with Liz about what’s going on, she wouldn’t have shown up to the prison thinking he was in some kind of danger, and the plan might have worked out. So, the idea that these two aren’t talking — this episode is a prime example of how that has repercussions for the both of them.

TVLINE | Speaking of which, will Red have any resentment toward Liz in the episodes ahead, since she foiled his plan? Or will he take the heat on that, since he intentionally hid his plans from her?
Reddington’s the kind of guy who is ultimately accountable to, and for, only himself. I don’t think he would blame her for it. He probably recognizes that he made some missteps along the way, and he would probably fault the plan. But it’s hard for him — Liz is like kryptonite to him. She melts him in some way, and it’s difficult for him to be angry with her, although he doesn’t yet know that she’s the one who turned him in to the police at the beginning of the season. He has threatened vengeance on whoever that is when he finds that person. So that kryptonite and that love that he has for her may come into a different focus, if and when that all comes out into the open. 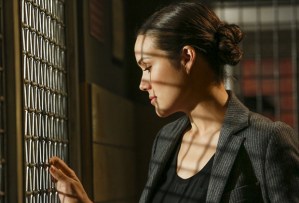 TVLINE | At the end of the hour, Red tasks Liz with finding the man in Cairo, and she seems a bit manic and desperate when she’s getting intel from The Cryptobanker. How big a role will the man in Cairo play in upcoming episodes?
He’ll be pretty significant. Looking ahead, things only become more dire. Reddington’s not just in prison anymore, he’s shipped out to Terre Haute for an execution in what are the most dire circumstances we’ve seen him in before. Some incredibly emotional scenes and some great acting come out of the episodes that are to come. He’s all but grasping at straws, and I don’t think Reddington ever thought he would be in his place.

The man in Cairo represents maybe the last lifeline he might have, but even just calling him “the man in Cairo” — we know so little about him and who this person is, how he might be able to help. Liz’s desperation is coming from a genuine place, because they’re out of time. People always say that a certain location is a character, and the clock is definitely a character in this next episode, because they are quite literally out of time.

TVLINE | How does that change Red’s mental state moving forward? He spoke a lot in this episode about the lack of hope, and how there’s nothing to live for if he has no hope. Will he be more despondent now?
He’s certainly not the same as he’s always been. More than anything, he’s almost at peace. I’m really excited about what James [Spader] and Megan [Boone] did in the coming episodes. James has often said that Reddington’s a character who realizes he may die at any moment. A lot of his zest for life and enthusiasm and humor comes from being at peace with the idea that he knows he could go at any moment. That’s now put to the test, and not in a desperate way where he’s scrambling. He understands that this day was fated. He would eventually end up in a situation like this, and it wasn’t in a shootout, it wasn’t in a Butch Cassidy blaze of glory. It came down to him being beaten by the system. His peace with that really shows a strength in who he is. There’s a real comfort in watching this man ready to go.

TVLINE | I’m curious, from your perspective, what Liz’s motivations are to save Red’s life right now. Is she helping him because she truly cares for him and wants him to survive? Or does she fear that if Red dies, the truth about his identity will die with him, and she can’t let that happen?
Yeah, I think that’s a smart question. Things are so real for these characters now, and she understands it’s less about secrets and motives and more about fighting for this man’s life. She and the whole task force are really on their heels about how they’ve ended up here, how quickly this has all transpired. Reddington pled guilty not because he gave up, but to protect the task force. One of the reasons he pled guilty was to make sure all they’ve done over the past six years doesn’t come out in the press and expose everyone who’s been involved and at his side. He’s fallen on his sword for them, and I think this is as “together” as they can come. When there’s an illness in the family or some kind of tragedy, everyone is pulled together. That said, I do think Liz is aware of the fact — and she’ll confront this — that this may be the last opportunity she has to get an answer from him. While that’s not her prime motive, it is certainly not lost on her, and she’s going to have to act on that.