The Blacklist crossed off not one but two names on Friday, courtesy of a two-hour episode that, among other things, brought Red’s trial to a tense conclusion.

But the jury’s verdict was hardly the only highlight of this super-sized installment: By the time the dust had settled on these eventful two hours, family secrets had been revealed, Liz’s betrayal of Red took several surprising turns, and the seeds of a potential romance were planted.

* In the first hour, Liz finally tracks down Marguerite Renard, the nurse practitioner who was in the room when Red’s impostor went under the knife to become Raymond Reddington all those years ago. But Liz and Jennifer’s plan to speak with Marguerite goes terribly awry, resulting in Jennifer getting kidnapped and beaten by a drug kingpin with whom Marguerite is involved.

The only upside to Jennifer’s abduction? She gets some face time with Marguerite, who insists that she never actually spoke to Red’s impostor or the Russian woman who arranged for the surgery to happen. Jennifer quickly pieces together that Katarina Rostova — aka Liz’s mother — is the Russian woman in question, and she’s confused as to why Katarina would have been involved with Red’s impostor at all.

Jennifer’s kidnappers ultimately return her to Liz, and Jennifer admits that this lifestyle just isn’t working for her; she kept Red out of her life for years, and now she fears she’s becoming him in her pursuit of the truth. For that reason, she’s taking herself out of the equation and leaving Liz to finish the job solo. “This will end,” Liz tells her half-sister while hugging her goodbye. “And when it does, I’ll find you.”

* In an effort to track down Jennifer’s captors, Liz goes to Red for help — omitting, of course, why Jennifer was taken in the first place, which would reveal that she and Liz were trying to speak with Marguerite Renard. But even when he’s behind bars, Red has a way of finding out the truth, and this time is no different: Later in the episode, he learns that Marguerite is tied to Jennifer’s kidnapping, and he’s able to connect the dots that Liz must know he’s an impostor if Marguerite’s name is coming up after all of these years. (Red, of course, continues to play it cool when he’s in Liz’s presence, resulting in a Friends-esque, “They don’t know that we know they know we know” situation.) 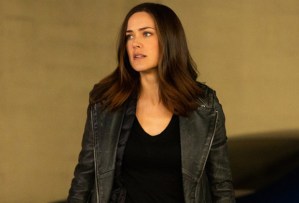 * Liz finally reveals to Ressler that Red is actually an impostor, which puts the typically straight-laced Ressler in a bit of an ethical pickle. He ultimately decides to help Liz in her pursuit of Red’s real identity — and if I didn’t know better, I’d say The Blacklist is suddenly setting Ressler and Liz up for a little romance down the line. Flirting? Check. Bonding over their previous failed relationships? Check. Ressler breaking his own moral code to help Liz? Check, check and check. (Also? I’m taken aback by how much I suddenly ‘ship it.)

* In the second hour, Dembe and Red finally hear the 911 call that ultimately got Red arrested. It clearly isn’t Liz’s voice on the recording, but Dembe eventually tracks down the real caller: a homeless woman who had accepted $100 from a dark-haired female in exchange for calling the cops. Dembe shows the woman Liz’s photo, and she insists that it wasn’t Liz who paid her to make the call — but Dembe later realizes that it was Jennifer who had paid the woman, and she and Liz must be working together to betray Red.

Dembe confronts Liz with this accusation, and she admits (rather quickly) that she is indeed Red’s traitor. But she knows Red will never forgive her if he finds out she double-crossed him, so Liz asks Dembe to keep this secret for her, much like he’s kept all of Red’s secrets for decades. Dembe reluctantly obliges, lying to Red later that day that Liz had nothing to do with the 911 call that got him locked up — and Red nearly doubles over in relief after learning that Liz didn’t (well, “didn’t”) betray him, after all.

* The last order of business is Red’s trial for treason, which comes to an end in this two-parter. Red insists to the jury that he never betrayed the United States (which, as a reminder, is the only thing he stands accused of in this particular trial); rather, he was framed by Katarina Rostova, who was determined to ruin Red’s reputation once he learned she was a KGB officer and that she reported to the Cabal. (Relatedly, remember the Cabal? Feels like a lifetime ago.)

Red’s potential acquittal ultimately rests on one important piece of evidence: a tape recording from Dec. 7, 1990, which should prove that Red — that is, the real Red — was framed. Thanks to the latest blacklister, known as “Minister D,” the task force does acquire the tape in question and presents it at Red’s trial. It’s a recording of a conversation between Katarina and Alan Fitch, the now-deceased former director of national intelligence (played in the first two seasons by Alan Alda).

During their chat, Katarina reveals that Reddington knows everything, particularly that she answers to the Cabal. Fitch tells Katarina to kill Reddington, but she insists that Red’s death would ultimately reveal the existence of the Cabal, since Red is a naval officer and his suspicious death would certainly be investigated. Instead, she believes the better play would be to frame Red for her treasonous acts and destroy his credibility. Not only is she doing this to keep the Cabal a secret, but because “I love his daughter — my daughter,” she tells Fitch on the recording.

The jury is sufficiently swayed by the audio they’ve heard, and Red is found not guilty on this particular charge. But Liz — who also heard the recording — is shocked and hurt to learn that her mother intentionally framed her father all those years ago. “Whoever you are today, whatever you’ve become — it’s because of the lies she told,” Liz tells Red, though Red insists that Katarina was “between a rock and a hard place” at the time. (And while I’m not entirely sold on some fans’ long-standing theory that Katarina is Red’s impostor, I confess I’m a tad more convinced after this episode. A tad!)

With that, I hand it over to you. What did you think of The Blacklist‘s two-parter? Drop all of your reactions in a comment below.