With only a few more episodes remaining in its freshman run, Thursday’s Legacies finally answered the question fans have been asking since the pilot: What is Landon Kirby?

The answer came after Landon encouraged MG to take a spring break road trip to his hometown, where we learned that MG’s religious father had no idea his son was reborn as a vampire. Part of the “arrangement” MG’s mother made with Alaric was that the Salvatore School would protect her son and keep his undead status a secret from the world. Had Alaric foreseen the events of this episode, perhaps he wouldn’t have been so quick to agree to her terms.

After revealing himself as a vampire, MG’s father cast him away (“My son is dead!”), sending MG on a downward spiral of heartbreak and hopelessness. In a horrific chain of events, MG accidentally killed Landon for making him go back home, inspiring Rafael (under the light of a full moon, no less) to take a bite out of MG. Hope was able to cure the bite with her blood, but by the time she found Landon’s body, it was too late to save him… or was it?

Just as the gang was ready to give up hope, Landon’s corpse burst into flames, leaving him encased in hardened ash. After only a few moments, Landon broke through the rock-like substance, revealing himself to be very much alive, begging Alaric to ask, “Have you ever heard of the legend of the phoenix?” And with that, we finally had our answer.

“How crazy was that?!” Quincy Fouse (aka MG) tells TVLine of his reaction to the big reveal. “Where did that even come from?! At first, I was like, ‘Y’all are really going to have me kill half of ‘Lope’? So the world’s just going to hate me now? That’s fantastic.’ But when I saw Landon resurrect as a phoenix, I had all sorts of questions. He can rise up, but can he project fireballs? Can he fly? Is he going to be like Jean Grey in X-Men? I’m waiting for all of these things to come up — they didn’t tell me anything.”

Below, Fouse answers more of TVLine’s burning questions from this week’s Paul Wesley-directed episode, including his personal thoughts on the no-longer-secret love triangle between Hope, Landon and Rafael…

TVLINE | First of all, I’ve been watching the actor who played MG’s dad [Christopher B. Duncan] for years. I feel like he’s been in everything.
Chris is dope, man. I didn’t see it at first. I was sitting with Peyton [Alex Smith], and he was like, “You know he was on The Jamie Foxx Show, right?” So I looked over and saw his face, and I was like, “No!” So he and I started talking and, weirdly enough, we had some deep conversations about religion and stuff, in light of the episode. We got deep into it. I did not expect to come to set that day and be hitting beats with somebody, then keep the beats going off-camera, too.

TVLINE | I would have mentioned The Jamie Foxx Show, but I figured you’re way too young to know what that was.
[Laughs] That’s Peyton’s thing. He makes fun of my all the time, because I’ll be like, “Oh, yeah, I know The Jamie Foxx Show,” and Peyton will be like, “OK, what was his character’s name?” and I’m like, “Look, man, I know he was there. Don’t come at me like that.”

TVLINE | Now you’ll be sure to look at every guest star’s IMDb page.
Oh, I’ll study it like I’m studying the script. Never again.

TVLINE | How was your experience with some of those heavier moments? We’ve seen MG down in the dumps before, but this was next-level.
Quincy and MG do have a lot of similarities. The biggest thing I can say is that MG is like a younger and more naive Quincy. Me at maybe 14 would be around where MG is at now. To go through those things and be in that mindset, like … kudos to [Stephanie McFarlane] for writing out these scenes, because it really hit home for me. There wasn’t much work I had to do. When I stepped into the situation, it was just that powerful. 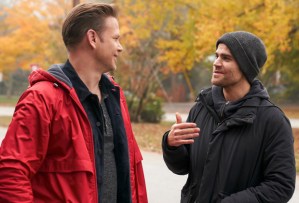 TVLINE | You also had Paul Wesley directing you. What was that like?
I was just talking about how specific his directing hit. He’s from this world, so he knows the specific way this show shoots. His directing was so specific that it couldn’t have been for any other kind of show. He knew how to talk to me on this show. It was dope getting to work with him and have that experience, an all-around good time.

TVLINE | I loved the “family” chat between Kaleb and MG. Is this the beginning of a strong bond between them?
Definitely. Kaleb had been a bit of a frenemy up to this point, but now MG has lost his entire family. He wants those strong family bonds, and he’s willing to put in the work to get them. When he’s in that car with Kaleb, he really wasn’t bonded to anyone. He felt so alone and had no hope. So when Kaleb gives that speech, it’s the beginning of MG not just choosing family but finding family that chose him when it wasn’t necessarily their job to do that, like Alaric.

TVLINE | Lastly, this episode finally confronted the Hope-Landon-Rafael love triangle. Do you have a preference?
Here’s the thing: I love Raf, and I love Peyton, but there’s something about the similarities on opposite ends of the spectrum between Hope and Landon — especially after this episode. Not only are they both loners with issues from their past, but now they also have this very peculiar supernatural background. They can provide a very specific support for each other. Don’t get me wrong, Raf has some of those things in common with Hope, but she and Landon need each other.

Your thought’s on this week’s many revelations (Landon’s true nature, MG’s past, the love triangle, etc.)? Drop ’em in a comment below.