Stefan Salvatore may be a distant, hellfire-grilled memory, but Paul Wesley remains very much at large in Mystic Falls, returning to direct tonight’s episode of Legacies (The CW, 9/8c).

Despite Legacies being set in the same fictional Virginia town as The Vampire Diaries, Wesley tells TVLine, “It feels like a completely different show. The one time I had a weird moment was when I walked into the Salvatore great room. That set is still there, and even though it’s on a different sound stage now, it’s the same set. They’ve changed a few little things, but that’s when I was like, ‘Oh my God,’ and I started getting that deep nostalgia. I felt like I was in Back to the Future or something.”

Read on for TVLine’s full Q&A with Wesley… 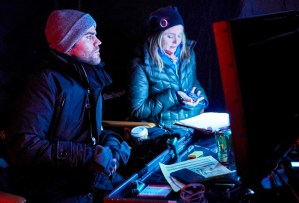 TVLINE | This must have been like going back to high school after you graduate and seeing how much has changed.
Yeah, I hadn’t been back to Atlanta since I wrapped The Vampire Diaries. I went in thinking I was going to be really weirded out by it, but I actually embraced it in a different way. It was nice to be there almost as a guest star, just popping in and out. I loved reuniting with my director of photography, Mike Karasick, who’s a good friend of mine. He and I worked together on my Vampire Diaries episodes, and I was so excited to collaborate with him again.

TVLINE | This episode looks like it mostly takes place outside at night. Did that give you flashbacks to your long Vampire Diaries night shoots?
For sure. I had a great time, but I would definitely think twice before doing a show where I play a character who thrives at night. It’s a very grueling thing to do 22 episodes a year for eight years in the woods. So, yeah, they definitely have some of that. But it comes with the territory of this industry.

TVLINE | Not to play favorites, but do any scenes or performances stand out in your memory?
It’s very much an ensemble, so I’m not sure there are specific moments or actors to highlight. They all had their fair share. For me, it was enjoyable in general, but Matt Davis has a really wicked sense of humor, even though he’s fairly [as Alaric] he’s a bit like the guardian. He really lets loose. I don’t know if a lot of it made the cut, but I think his next show should be a half-hour comedy. We got to play around with a few funny moments. I liked having fun with an old buddy.

TVLINE | One of my favorite parts about watching Legacies has been getting to see so many new sides to Alaric.
My episode’s actually not as humor heavy. It’s more of a traditional episode like The Vampire Diaries. The ending is very dramatic. It’s really powerful, and I’m not just saying that. But I watched the show so I could do my research. I noticed it was pretty heavy in satire, which I think is really smart. After a while, you can’t really take yourself too seriously when you’re dealing with supernatural elements on a fantastical show. You have to make fun of it a little bit, and you can tell they’re really embracing it.

TVLINE | They’re also really expanding the mythology. If you come back to direct another episode, what kind of monster would you hope for?
It would be great to play a flawed monster, maybe a monster who doesn’t want to be a monster, or has some level of humor to his viciousness. The best characters are ones where you can see their humanity. It would be great to be the antithesis of what the cliché monster is.

TVLINE | I think you just described Stefan.
Yeah, I guess, although I’d like my monster to have a little more humor.

TVLINE | I know that Stefan is dead, and you’ve commented on this already, but is there anything Julie Plec could do to get you back on screen as Stefan?
No. Let’s leave on a high. Let’s not resurrect something and potentially ruin the legacy — no pun intended.

Have you accepted that we’ve seen the last of Stefan Salvatore? Drop a comment with your thoughts below.