Life is about to get a lot more complicated for Roswell, New Mexico‘s favorite bartender. Tonight’s episode (The CW, 9/8c) introduces viewers to Maria’s mother Mimi (played by The Fosters‘ Sherri Saum), whose arrival forces her to confront some difficult truths about her family.

“We find out why Maria has that warrior spirit, why it exists inside of her,” Heather Hemmens tells TVLine of the revealing hour. “Maria is always so positive for her friends’ sake, and she’s always helping them through their drama, being this source of strength for them. Now we finally get to see why she has that resilience.”

This is also a key episode for Maria and Liz, whose friendship is strengthened as a result of their shared experience with Mimi. “She doesn’t want people to feel sorry for her, and she doesn’t want the attention turned onto her struggles,” Hemmens says. “But this is a reminder to her that it’s OK to cry. It’s OK to be overwhelmed by your responsibilities and feel in despair. But it’s also really special when you have friends who can share that with you. It’s very important, and female friendship should never be overlooked.”

In addition to the unexpected truth bombs she drops on Maria’s friends tonight, Mimi’s actions also inspire her daughter to think more about her family’s psychic abilities. “She plays with it and she makes money off of it, but she hasn’t stared it in the face and asked, ‘What is this to me, and where does it come from?'” Hemmens says. “She’s beginning to realize that this is an inheritance. To just cast it aside would be a waste.” 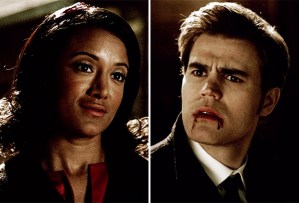 Hemmens also enjoyed collaborating with director Paul Wesley, though it wasn’t the first time the two have worked together: “I did an episode of The Vampire Diaries years ago [Season 5’s ‘Man on Fire’], and most of my scenes were with Paul,” she recalls. “He was a generous, welcoming actor, and he was the same as a director. He’s somebody who really gets The CW and gets the show. He fit right in.”

“I’ve also been dying to work with Julie Plec [ever since that episode],” she adds. “I try to soak up every minute I get to spend with her. She’s such an incredible director, mentor and champion of all females on set, just a great leader for us.”

Hit PLAY on the video below for an inside look at tonight’s Roswell, New Mexico, then drop a comment with your thoughts about the episode.