This week, in the penultimate Season 2 episode of The Good Doctor, Shaun Murphy finds himself at wits’ end. He marches into Dr. Han’s office and demands that he be reinstated as a surgical resident.

Shaun’s breakdown is explosive. “I am a surgeon!” he declares, repeatedly. Han explains to Shaun that his continued outburst will get him fired, but the medical prodigy has been pushed to his breaking point. He screams incessantly and flashes his badge in the chief of surgery’s face, as his eyes well up with tears.

We then cut to the locker room, where Shaun is visibly shaken. He struggles to get his backpack out of his locker, then proceeds to spill its contents all over the floor. When he bends down to pick up his belongings, he grabs his toy scalpel and begins forcefully running his thumb against its spine. This eventually causes the plastic blade to snap off. Devastated, Shaun sits down and runs his fingers along the nub. That’s when Claire walks in and takes notice of Shaun’s condition. She gathers his belongings and sits by his side, saying nothing. As the episode draws to a close, Shaun exits St. Bonaventure. He turns around to look at the hospital, then wanders out into the rain.

So what is it that finally sets Shaun off? Well, he’s actively involved in two cases this week. The first case concerns Lim’s high school friend Laura, a new mom believed to be abusing her baby. (We eventually learn that the internal injuries the infant has sustained were the result of a subdural bleed during delivery; Laura did not hit her child.) The second case involves Kenny, a teenager with a neurofibroma near the base of his spine that has circled his abdomen and grown over 100 (!) pounds. Claire comes to retrieve Shaun from pathology when Melendez determines that his expertise is needed in surgery. Han insists that Shaun’s services won’t be necessary, but Melendez puts his foot down and says that it’s his patient, his call. Shaun arrives in the nick of time and offers a live-saving consult, but is not asked to scrub in for the duration of the procedure. 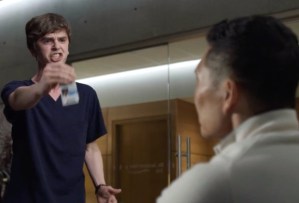 That brings us back to the moment that Shaun confronts Han. He marches into the chief’s office and fights for his job. “I saved the patient,” he says. “I deserve to be a surgeon.” Han acknowledges that Shaun made a great save on last week’s case, as well the current one, but isn’t willing to reverse his decision. That’s when Shaun raises his voice. He says he won’t leave Han’s office until he is reinstated. Han refuses to be bullied, and deems Shaun’s behavior immature. “You’re proving that you can’t communicate and can’t control your emotions,” he says. “But you do have a talent that I value, so I’m going to give you one last chance to maintain your dignity and leave my office now… If I have to call security, you understand that I’m also going to have to fire you.” But Shaun is apoplectic. He launches into the aforementioned outburst that may or may not cost him his career.

The other big moment this week comes when Glassman is declared cancer free. After Dr. Blaize gives him the good news, he gives her an incredibly thoughtful thank-you gift: a foul ball he caught at an Oakland Athletics game when he was just a teenager. He attended the game with his father, then waited behind the stadium to have all the players come out and sign it. The token of appreciation brings Blaize to tears, who says that cancer has a tendency of changing people, often the better. An equally emotional Glassman flashes Blaize a smile, then heads out.

* At the beginning of the episode, Lim meets with the California State Medical Board, which is set to determine whether Shaun, Melendez and Lim should have their licenses revoked. The chief tells members of the board that he has used the hospital’s resources to hire a P.I. to dig up dirt on each and every one of them should they strip his doctors of their ability to practice medicine. And just like that, a potentially major storyline is resolved.

* Lim and Melendez decide the time has come to go public with their relationship. We last see them venture into Andrews’ office to give him the news.

What did you think of The Good Doctor Season 2, Episode 17? And what are your hopes for the March 11 finale? Sound off in the comments!