Less than one month after NBC announced that Gabrielle Union and Julianne Hough would be joining the judges’ panel for America’s Got Talent Season 14, we have our first look at the show’s newest additions in action. The above photo was snapped on Sunday, which marked the first day of production on the reality competition series’ new season.

As previously reported, Union and Hough are replacing exiting judges Mel B and Heidi Klum, both of whom joined AGT in Season 8. Additionally, Terry Crews — who recently served as the host of America’s Got Talent: The Champions — is taking over full-time hosting duties from Tyra Banks, who was with AGT for Seasons 12 and 13.

Of course, this franchise is no stranger to casting changes. During the past 13 seasons, we’ve seen a slew of celebrities come and go, including Regis Philbin, Brandy Norwood, Sharon Osbourne, David Hasselhoff, Howard Stern, Piers Morgan, Jerry Springer and Nick Cannon.

Though an exact premiere date for America’s Got Talent‘s 14th season has yet to be announced, the show will be filming at the Pasadena Civic Auditorium through the end of March.

Your thoughts on Union and Hough joining the panel, as well as Crews taking over hosting duties? Check out another shot of the newbies below, then drop a comment. 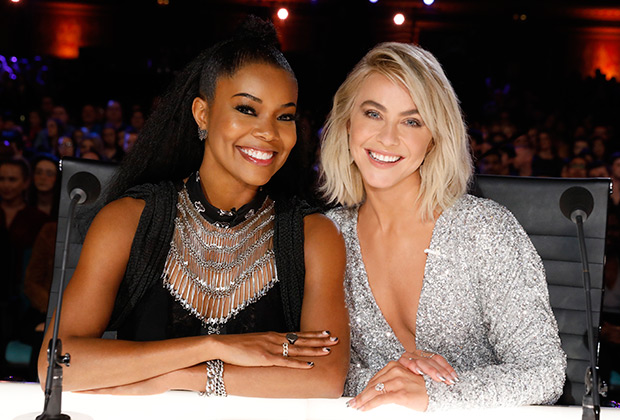