In the Feb. 28 episode of Brooklyn Nine-Nine, Capt. Holt tracked down his longtime nemesis, the Disco Strangler, with an assist from Terry and Charles. Believed to be dead, the notorious serial killer — who uses yo-yo strings to throttle his victims — faked his own death as part of an elaborate prison break. The hunt culminated in a not-so-epic showdown between Holt and “the most dangerous man in America,” now a partially crippled octogenarian who weighs in at just 93 pounds.

The sidesplitting sequence was helmed by series star/first-time director Stephanie Beatriz, who was positively giddy about the opportunity to lend her vision to the scene. 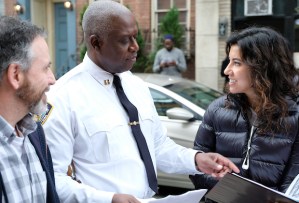 “I was beside myself with childlike creativity that day on set,” Beatriz tells TVLine. “That scene in the street with the two of them facing down, I kept having all these images of old spaghetti westerns. Those are [what] I pulled from to show our director of photography [Rick Page]. Andre [Braugher] was like, ‘I’m not quite sure I understand what you mean,’ then I got to open up my binder and show him weird pictures that I’d been drawing.”

The Disco Strangler scenes were “so zany and wacky and fun,” Beatriz says, and quite a departure from the episode’s #MeToo-themed A-plot. “I was really excited to do that plot line with Terry [Crews], Joe [Lo Truglio] and Andre, because I think the three of them — whatever that chemical mixture is between those three guys together — is just so funny and so weird.”

Did you enjoy watching Capt. Holt face off against the Disco Strangler?