Spock finally made his Star Trek: Discovery debut this week… but he’s quite a bit different from the coldly logical Vulcan we’re used to, isn’t he?

When Burnham tracked down her long-lost brother in Thursday’s episode, he was, well, freaking out — muttering logical doctrines to himself in a remote cave, and obsessed with the Red Angel. She brought him back for medical attention, and Section 31’s Captain Leland wanted to give him a neural scan, but Georgiou warned Burnham that the “scan” is actually a memory extractor that would destroy Spock’s brain. Burnham busted Spock out of there, and they escaped in a shuttle, where Burnham cracked the code of Spock’s mutterings and set a course for… the Talos IV planetary system. (Yes, that’s the home of the big-headed Talosians that Spock and Captain Pike encountered in the original Trek series’ “The Menagerie” and the unaired pilot “The Cage.”) 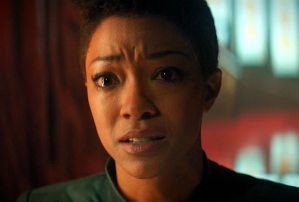 Burnham and Spock have a “very, very complicated” relationship, series star Sonequa Martin-Green tells TVLine. “It has a lot of weight, because it’s longstanding. They bring out a lot in each other, and there’s a lot of ground that needs to be covered between the two of them.” Ethan Peck, who joined the Season 2 cast as Spock, adds that “there’s a lot” between the siblings “that’s been left unresolved for a long time.” (Well, they’ll have plenty of time to talk on that shuttle to Talos IV.)

We learned what caused the rift between Burnham and Spock a few episodes back: She pushed him away after the Vulcan logic extremists tried to kill her as a child, just in case they came back. “They bombed the entire school just to get me,” Martin-Green reminds us. “There was a threat of them coming back, and a threat of them sort of finishing the job. Who would be collateral damage? We were together all the time. We were inseparable. So if they tried to attack me again, the person directly next to me is going to get it.”

Discovery‘s Spock is still growing up, and thus he’s a more agitated, untamed version of the Vulcan we know and love, Peck explains: “I think he might be a little more combative at this point. Not just with himself, but with his circumstances and with his family. There’s a greater amplitude between logic and emotion, and with that comes sort of a more outrageous version of him.” The mystery of the Red Angel will play a key role in his development this season as well. “He’s had a traumatic experience with the Red Angel,” Peck hints, with Martin-Green adding that the Red Angel continues to be “a prevailing theme” throughout Season 2. “As we’re exploring faith and science, the Red Angel has a lot to do with that.”

For more on Peck stepping into the role of Spock, click here. Got thoughts on Spock’s arrival on Discovery? Beam down to the comments below.