The long wait is almost over, Star Trek: Discovery fans. After a half-season of hints and teases, we finally get our first look at a young Spock in Thursday’s episode (CBS All Access, 8:30/7:30c), with Ethan Peck stepping into the iconic role played by Leonard Nimoy on the original Trek TV series.

Peck — a veteran of Gossip Girl and Madam Secretary, and the grandson of legendary actor Gregory Peck — knows full well what huge shoes he’s about to fill… even though he didn’t know whose shoes they were at first. “I had gotten the call from my managers to put something on tape for Star Trek, for a new role, a role they were bringing back,” he tells TVLine. “I had no idea what it was. I thought maybe it might’ve been Data.” After going through several rounds of auditions, he learned he’d be playing Spock, “and I was so beside myself, because (a) How is this possible? (b) How am I this far along in it? And (c) Am I capable of this?” 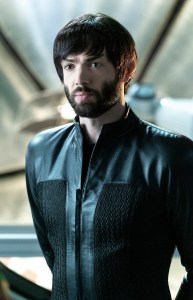 Playing a role as revered as Spock is “an incredible opportunity,” Peck notes, “but also a terrifying one that comes with a lot of responsibility. It means a lot to me that this character and world is respected and treated with great care.” He wouldn’t call himself a full-blown Trekkie, he says, but “I’m a big science-fiction buff. I loved J.J. Abrams’ movies. I love [Star Trek:] First Contact… yeah, I’m definitely a fan.”

So what does it take to transform Peck into the beloved Vulcan? “It’s about a two-and-a-half-hour to three-hour makeup job,” Peck admits. “There’s the wig, then they block out my eyebrows with many layers of glue and what’s called bondo and an eyebrow blocker, which further hides the darkness of my eyebrows. And then they add the eyebrow above it, and then have to blend it and make it look like my face… which is a feat!” Spock’s trademark pointy ears are “pretty quick” to add on, though, he says. “That’s like half an hour.”

Peck’s Spock is about ten years younger than Nimoy’s, and he does look a little different from the Spock we’re used to, with long shaggy hair and a beard. (No, not a goatee — he’s not mirror-universe Spock.) “I was told not to shave about a month out before coming to Toronto to begin production,” Peck recalls, “and I was like, ‘What?'” But he sees Spock’s hair and beard as a hint at the youthful tumult going on inside him: “This is a time in Spock’s life when I think the deep inner conflict of human versus Vulcan really comes to the surface… so I think it’s an expression of his state of mind.”

Yes, Peck is aware that Spock’s new look is “controversial,” but he doesn’t mind… adding that viewers will learn the reasoning behind it by season’s end: “People are gonna hate on it. People are gonna love on it, hopefully, too. But it’s done for a really remarkable reason that will be revealed by the end of the season.”

Got thoughts on Discovery‘s new-look Spock? Beam down to the comments.