If ever an occasion called for a blowout to end all blowouts, tonight’s Grey’s Anatomy was it. Not only is the hour “our first-ever no-medicine episode,” says showrunner Krista Vernoff, but it breaks ER’s record, making the ABC smash the longest-running primetime medical drama in American TV history. 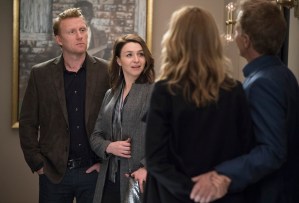 On screen, “Jackson is throwing a party to celebrate Catherine’s successful surgery” and the doctors who performed it, explains the EP. So right off the bat, that’s an extremely tense situation, since it puts all four legs of the Amelia/Owen/Teddy/Tom quadrangle in one room. Plus, Meredith and DeLuca aren’t just on the guest list, they’re “coming to that party as a couple. It is in many ways their coming out.

“And since Alex is still chief,” she adds, “Meredith also has to tell him about her relationship in an official capacity.”

Speaking of Karev, he and Jo have RSVP’d yes without any inkling that his mom Helen (guest star Lindsay Wagner) is about to pay them a visit. “She turns up unexpectedly, and Alex doesn’t know where she is at with her [mental] illness,” previews the doc’s portrayer, Justin Chambers. Adds Camilla Luddington, aka Jo: “We’re trying to read the situation, and we can’t, which is complicated.”

Meanwhile, despite the fact that “We Didn’t Start the Fire” has no cases-of-the-week, “a patient that Maggie treated before comes back into her life in an interesting way,” teases Kelly McCreary, who plays Pierce. “She’s sort of preoccupied with that in this episode.”

The actress herself might have been sort of preoccupied, too — by the momentousness of the milestone the show was reaching. “It’s mind-boggling,” she admits. “When I first started in Season 10, I had no idea it would continue this long. You can’t assume. So to be here and not only be in our 15th season and going strong but to be making television history… it feels huge and very humbling.”

Debbie Allen, the executive producer and sometime director who plays Catherine, concurs. Being a member of Team Grey’s “means I am part of a legacy that will stand the test of time, because Shonda Rhimes created a show that helped the world see themselves as they could be and should be and as we are,” she suggests. “And Shonda gave us Krista Vernoff back, which was the gift of a new life for the show, because Krista’s thought pattern is the one that’s most like Shonda’s. She was there from the beginning, then she left and came back to us.

“This has been amazing,” she continues. “It feels like the show is brand-new. It’s a little more fun. There’s always darkness, but there’s been a lot of joy.”

No wonder, then, that even James Pickens Jr., who’s played Richard since Grey’s debut, doesn’t contemplate hanging up his stethoscope. “It’s been such a ride,” he marvels. “It’s still fun coming to work. When it ceases to be fun and starts becoming a chore, then it’s time to go.” (Reporting by Michael Ausiello)