And that’s a series wrap!

On Tuesday, filming on Orange Is the New Black‘s seventh and final season concluded, with executive producer Jenji Kohan, author Piper Kerman and series star Taylor Schilling among those documenting the last moments on set.

OITNB‘s swan song was first announced in October. “After seven seasons, it’s time to be released from prison,” Kohan said in a statement. “I will miss all the badass ladies of Litchfield and the incredible crew we’ve worked with. My heart is orange but… fade to black.”

OITNB Series Finale: Behind the Scenes 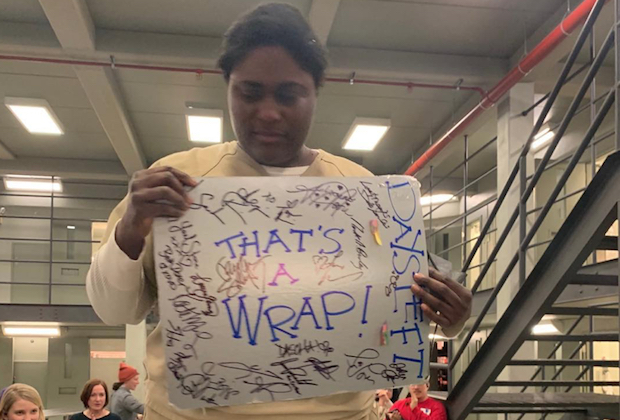 The Season 6 finale featured Piper’s early release from Litchfield, while an earlier episode hinted at the possibility of her writing a memoir about her time in prison. Taystee, meanwhile, was found guilty for the murder of Piscatella (after the MCC guards successfully covered their tracks) and sentenced to life behind bars (read recap). A premiere date for Season 7 has not yet been revealed.

Peruse the attached gallery (or click here for direct access) to scroll through a series of behind-the-scenes photos, then scroll down for additional posts (including throwbacks and on-set videos) from the cast and crew…

#FBF to directing my episode of #OITNB this season. I loved directing Taylor in these scenes & can’t wait for you guys to see them! #orangefamily #FemaleFilmmakerFriday

#ThrowbackThursday to an Alex look that we tried out during season one of #OITNB. It didn’t make it in, but we had fun doing it. Nearing the series wrap—feeling nostalgic! #orangefamily #tbt

Wait!!! I forgot to steal this Marx Brothers poster from the Kaufman stages—— is anyone still there to steal it??? cc: #orangefam anyone??

We were Dogwalking each other long before @iamcardib so wisely suggested it. @oitnb @sheisdash 🐾🖤🖤🖤🍊🎥🖤🖤🍊🖤🐾🐾🖤🐾🖤🍊🐾🖤#EndOfAnEra

That’s a wrap for me ✝️ What a neat, exciting, enlightening, sometimes traumatic but fantastic 7 year journey we had on a 7 year amazing, life changing show @oitnb A forever experience I shall never forget❤️ A life changing one I will always remember. All the amazing people I worked with and for, all the feelings we shared and all the time spent. This is for anyone I could not share a goodbye with💟 I do not like goodbyes😔 I am off to another loving and loyal job I am so grateful to have had in Hawaii! My good fam @hawaiifive0cbs #aloha!!! I love you and think of me during the wrap party where goodbyes are shared! I Wish my cast mates, crew, Netflix, Lionsgate, New York, and my beloved team and everyone’s teams for seeing the potential in the show and for winning! I wish a beautiful life and future for all! I Really love you all! Thank you from the bottom of my ❤️ #7 #oitnb #netflix #lionsgate #actor #god Maybe one day my cast mates will like my photos and invite me out if I get to be as cool! ❤️

Yes it's a little blurry. No. you have no idea who these people are. Tonight is an Orange is the New Black tradition. At the end of every season we celebrate each other. So please celebrate our crew that handles the cameras, the lights, the sound, the costumes, the makeup, the set and props. These are the people that make your favorite show happen. #orangefamily

On this the last day of shooting I present, in no particular order, some fond memories. Thank you @oitnb for making me the #lordofthelesbians. #byeboo

As we approach the last day of shooting I wanted to say thank you to all of you who watched us on Orange Is The New Black . #oitnb #samhealy #litchfield #jenjikohan #friends #Art

Thank you to the producers, writers and the crew of Orange. You are the BEST. The BEST. There are no words #orangefam #oitnb 🧡🧡🧡

Just a few more guys and then I’m done I swear! #oitnb #orangefam

That’s a wrap! Thank you to everyone who worked on this show and all the lovely people who watch it! I’m so grateful. Thank you @ijnej – for your brain, heart and support. I met @viccimartinez 💕and @officialbethdover and @lvinnecour and so many other hugely important people that I will love forever on @oitnb 🍊🧡🍊#orangefamily #seeyouinseason8JKJKJK #imfineitsfineimfine

What are your hopes for OITNB‘s farewell run? Share your wish lists in the comments!