The Masked Singer sent not one but two competitors home this week, leaving just three in the running to be the season’s big, sweaty-under-that-heavy-costume winner.

The final five contestants — Lion, Monster, Peacock, Bee and Rabbit — gave it their all in an hour that ultimately removed two cloaked crooners from the running. Meanwhile, on the guessing panel, Saturday Night Live‘s Kenan Thompson joined Jenny McCarthy Wahlberg, Nicole Scherzinger, Ken Jeong and Robin Thicke in trying to suss out the singers’ true identities.

Read on to find out which two soloists were sent home (and who they truly were!).

PEACOCK | The bird gave a banging performance of “Let’s Go” by Calvin Harris featuring Ne-Yo, even stepping down into the crowd to woo a few ladies during the song. (Side note: Peacock certainly has one of the easiest-to-move-in costumes, which seems like an unfair advantage. Imagine if Monster wanted to take his act into the audience? LIVES MIGHT BE LOST.) (My guess: Donny Osmond.) 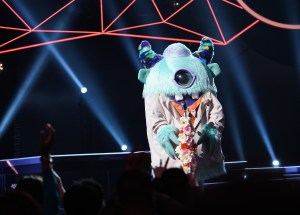 MONSTER | If you told me six months ago I’d wish this show would release audio of its performances on iTunes, I would’ve told you to shove a handful of blue synthetic fur where the sun don’t shine. But then Monster turned out an incredibly affecting rendition of Sam Smith’s “Stay With Me” in this week’s episode, so here we are. (My guess: T-Pain.)

LION | “Don’t You Worry ‘Bout a Thing” by Stevie Wonder was a great choice for the big cat, who executed some beautiful runs that made Thompson wonder whether Kelly Rowland was under all the gold and fur. It was a legit suggestion, but I still think that it’s… (My guess: Rumer Willis.) 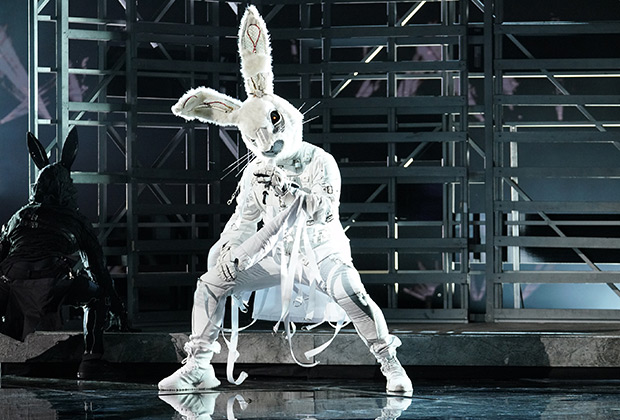 RABBIT | While watching the bunny perform “My Girl” by The Temptations, I reflected on what a refreshing change it is that this show, as ridiculous as it is, has steadily eliminated the weaker singers before the stronger ones. And Rabbit certainly has serious chops. But that head-twitching thing has to stop. Please. I’m begging you. (My guess: Joey Fatone.) 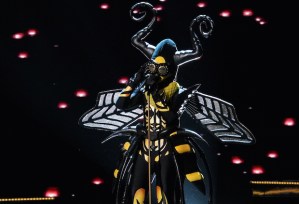 BEE | Re: my earlier comment about Monster’s “Stay With Me?” Yeah, you can add Bee’s cover of Aretha Franklin’s “(You Make Me Feel Like) A Natural Woman” onto that playlist. (My guess… well, I’ll just quote Thompson after the winged one sang: “Who in their right mind doesn’t know that’s Gladys Knight?”)

Now it’s your turn. Did you guess Rabbit and Lion’s true identities? Got thoughts on the remaining masked players? Hit the comments!