Madam Secretary‘s President Dalton is known for being a man of action, a leader who swiftly gathers his cabinet’s counsel then moves forward with decisive action. So his hesitant approach to an international incident — which played out in Sunday’s episode — was something portrayer Keith Carradine hadn’t often encountered in five seasons of portraying the fictional POTUS. And when he had, the matter was literally life or death.

Carradine recalls Dalton’s brain tumor in Season 4, which impaired the commander-in-chief’s judgment and led his advisers to consider using the 25th Amendment to replace him. Though everyone (and the country) emerged from that crisis unscathed, “one of the things that was mentioned, and that he lives with, is that [the tumor] could come back,” the actor tells TVLine. “It’s always under the surface in my mind, that sort of niggling self-doubt that will always be there ever since he had that experience.”

Sunday’s installment chronicled an incident that happened in 1983, when Dalton was CIA station chief in Nicaragua. Via flashbacks, viewers saw an op that went very wrong and ended with the death of President Sandino’s wife. In the present-day, Sandino’s son was the Central American country’s dictator-esque president himself. Dalton’s guilt over his involvement in the man’s mother’s death caused him to hold off on taking a strong stance when the Nicaraguan president OK’d a military siege against some charity workers — including a few Americans — holed up in a church.

Read on for Carradine’s take on Dalton’s daring attempt to rectify the situation in both timelines, and make sure to stick around for his take on what Conrad’s life might look like the day after Elizabeth (fingers crossed!) takes over the Oval Office. 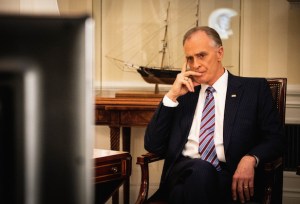 TVLINE | If Dalton were still CIA station chief in Nicaragua, do you think he’d still be willing to throw himself into a dangerous situation with Sandino Jr. the way he did with Sandino Sr.?
No. I think he might have gained a little wisdom with age. That was somewhat reckless, and I think that kind of recklessness is the providence of youth, is it not? Perhaps if he had to do it again, I think he probably would have found a more judicious way to try to disarm the situation.

TVLINE | He never told Elizabeth that he directly approached Sandino Sr. It’s a surprise to her when she reads it in the file. They’re close friends. Why do you think he never brought it up?
Well, I think that it was…for me that would have been a case of people only need to know what they need to know, and that was not a need-to-know for her, as far as he was concerned at the time. And I think that that’s about compartmentalizing the process and not wanting to put people in a position of being involved in something that might prove to be sticky for themselves, for their own position within the agency. I think he was probably, in a certain way, protecting those who didn’t participate in that particular operation.

TVLINE | Do you think that Dalton sees the Nicaragua incident as one of the major failures of his career?
I certainly think he carries that as in his bag of mistakes that weigh on him, you know? Absolutely. Those kinds of mistakes, when they are made and the consequences of them, can lead to how one thinks forward from that, and the kinds of decisions one makes having made those mistakes. 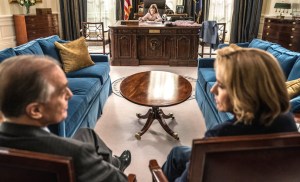 TVLINE | I’m guessing you probably have not discussed this at all with the show, and it’s far off, but what do you think Dalton’s retirement plan could be? What will he do, first thing, the first morning he’s not president?
Sleep in. [Laughs]

TVLINE | I’ve often wondered how it feels when you go from being the leader of the free world one day to being a normal American citizen the next.
It has to be an extraordinary change. You know, we’ve watched Obama in his retirement from the presidency, and he’s remained extremely active. He’s obviously an active participant in our democracy and the preservation of such. I think he’s very committed to that, and I would imagine that Dalton, the nature of his character is such that he would probably try to remain some kind of a force for positive, forward movement in our society,  in our country and in our democracy. I don’t think Dalton… He doesn’t strike me as a president who takes a whole lot of executive time.