It’s hard to believe that Don Cheadle hadn’t hosted Saturday Night Live before this weekend’s show. The Black Monday star (and winner of the Avengers’ SNL raffle) proved himself an absolutely terrific choice of emcee, scoring laughs as an inappropriate educator, an amateur baker and a pesky houseguest.

Cheadle was the rare host able to elevate even the most lackluster material, including a ridiculous bar fight sketch and not one, but two commercial parodies. He’s sure to be invited back in the not-too-distant future.

BEST: FRESH TAKES
The return of this high school newscast was an improvement on the original, Larry David-led sketch, thanks in no small part to Cheadle’s performance as gossip-mongering Earth Science teacher Mr. Paul. (“There’s a reason I don’t work at Chipotle,” he said. “I spill all the beans.”) Also amusing was Kyle Mooney’s failed attempt at landing a winter formal date at the tail end of Cold Sore Watch.

BEST: EXTREME BAKING CHAMPIONSHIP
This admittedly predictable skit (which I have to assume was at least partially inspired by Netflix’s Nailed It!) took an absurd left turn when Cheadle’s abominable Cookie Monster cake came to life. Just goes to show that Kenan Thompson can improve any sketch — even when he’s just lending it his voice.

HONORABLE MENTION: ROACH-EX
This otherwise forgettable pesticide ad was saved by an extremely dark twist, when Mikey Day’s cuckolded husband finally took a stand against the humanlike cockroach who’d successfully moved in on his wife.

HONORABLE MENTION: WEDDING VENUE AD
The cutaways to Cheadle (whose employee served as chef, photographer and DJ) were the best part of this commercial parody for the Grand Prospect Hall wannabe. Among the benefits of hosting your special event at this particularly gaudy venue: carpeting in every room (including the bathroom), a loose outlet to charge your phone (“You plug in your phone, it gonna fall right out!”) and an entree consisting of flank steak, liquid potato and “the squeakiest green beans you’ll ever bite in your life.” 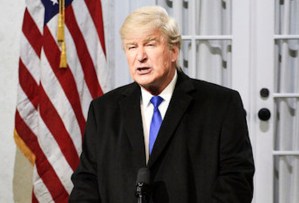 WORST: TRUMP PRESS CONFERENCE
Alec Baldwin phoned it in, as usual. There was even a bit of meta commentary about his hope to retire the once Emmy-worthy impersonation (“… and my personal hell of playing president will finally be over”). His performance was so sleepy, it at times sounded like he was drifting into a Bill Clinton impression. (Watch it here.)

WORST: FAMILY FEUD – OSCAR NOMINEES
Points to Cecily Strong for her impression of The Favourite’s Olivia Colman… and that’s about it. Even Melissa Villaseñor’s Lady Gaga, a highlight of last weekend’s Halsey-led episode, was bogged down by lackluster writing. Kyle Mooney’s Bradley Cooper and Pete Davidson’s Rami Malek were downright awful.

What were your favorite sketches this week? And what missed the mark? Watch all of the highlights above, then grade Cheadle’s hosting debut in our poll.