No, you aren’t hallucinating: How to Get Away With Murder‘s Bonnie and Frank really are smiling in that photo above, which might go down as this season’s single biggest plot twist.

The ABC drama took a very brief break from its characters’ endless misery on Thursday night, as Annalise hosted a holiday dinner for her co-workers (and her mama, Ophelia, played once again by the inimitable Cicely Tyson). But since this is How to Get Away With Murder, where even the most festive occasions take an upsetting turn, the Christmas soirée had its fair share of low points, of course.

Read on for the details of “Where Are Your Parents?”:

IMMUNITY CHALLENGE | Not five minutes into her mother’s holiday visit, Annalise receives a call from Agent Telesco, who asks Annalise to meet her at the FBI offices — and she’s prepared to offer Annalise full immunity, for “all of it.” Annalise tells Nate about the offer and insists she would never sell him out by taking the deal, though Nate says he would understand if she did accept it, considering Miller’s death had nothing to do with her.

Ophelia overhears Annalise and Nate’s conversation, and she implores her daughter not to do anything that would put Nate in danger. In fact, she even suggests (in multiple scenes!) that Annalise and Nate get married so they won’t have to testify against one another. Hmm… 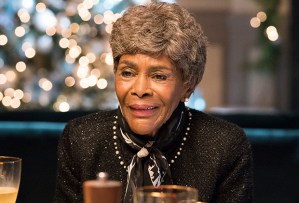 Annalise ultimately decides to meet with Telesco after the holiday is over, and she tells Telesco to draw up the immunity paperwork. But when Annalise arrives at the FBI offices for the meeting, she’s kept waiting for 20 minutes, until a different agent finally comes in and cryptically reveals that the meeting will have to be rescheduled. (“I’m not at liberty to say,” the agent offers, when Annalise asks her where Telesco is.)

Telesco, as we come to learn, has been taken off the Miller/Sam Keating investigation until further notice. As it turns out, Tegan Price had met with Telesco in her car the previous night, for matters related to the investigation. Somewhere along the way, their conversation turned to romance, and both women revealed that they were single — which ultimately led to a make-out session (!) right there in the car, followed by even more hubba-hubba happenings (!!) later that night.

But Tegan was playing Telesco the entire time: The next day, just as Annalise is expecting to meet with Telesco, Tegan takes a meeting with Telesco’s fellow investigator, revealing to the man that she and Telesco slept together. The agent then confronts Telesco and reprimands her for several weeks’ worth of misconduct (i.e. planting evidence, offering Gabriel an immunity deal without his lawyer present, etc.), ultimately pulling her off the investigation indefinitely. Later, Tegan fills Annalise in on all of these details, simultaneously warning Annalise that she’s only got a small window of time before Telesco inevitably gets replaced by another cutthroat investigator.

At the end of the hour, Annalise is unexpectedly contacted by Gov. Birkhead, and she reluctantly meets the woman at a nearby church later that night. Birkhead insists that she had nothing to do with either Nate Sr.’s or Miller’s deaths, but she claims to know who did have Nate Sr. killed: Emmett Crawford. (Annalise is even presented with a file on Emmett that seems to shock her, though we don’t get to see its contents.)

SLAY BELLS RING | Meanwhile, Connor, Oliver, et al. host a Christmas party of their own (which, much to everyone’s chagrin, includes Gabriel). Although the festivities start pleasantly enough, their Christmas dinner is interrupted by Agent Telesco (pre-suspension, that is), who presents a warrant for Connor and Oliver’s wedding photos. And the pictures aren’t the only thing she wants: Telesco’s warrant also gives her permission to swipe anything that could help the Miller investigation… including Oliver’s laptop. Gulp.

Oliver assures the gang that the FBI won’t find anything on his computer, seeing as investigators don’t have the passwords that will get through Oliver’s firewall. But Connor’s mom is still rattled that the FBI showed up at all, and Connor is left to spin her a comforting lie, fibbing that Gov. Birkhead is really the person that investigators are targeting. (By the way, Connor had his mom delete that incriminating Instagram photo from the wedding reception, so that loose end should be tied up, at least for now.) 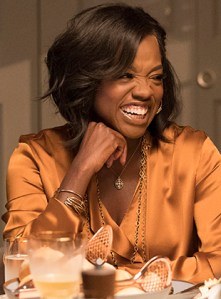 * Laurel receives a phone call from a withheld number, and when she answers, all she hears is shaky breathing for a few seconds until the call drops. She worries that it might have been her mother (whose whereabouts we still don’t know), or that her father somehow orchestrated the call, but the episode ends before we can get any more clarity.

Speaking of Laurel, she decides to put Christopher’s blood-stained blanket from the wedding back into his crib, in order to keep FBI agents from finding it stashed in a plastic bag under the crib instead. But later in the episode, Laurel suspiciously dials Agent Telesco’s number and leaves her a voicemail, urging Telesco to call her back.

* After attending Miller’s funeral, Bonnie spends the episode becoming increasingly distraught at any mention of her deceased beau. She later admits to Frank that she’s been feeling dizzy and nauseous for several days, insinuating that she could be pregnant. But after taking a home test at the end of the hour, she tells Frank that the results were negative. (It’s worth noting, though, that we don’t actually see the test results for ourselves.)

* Emmett and Annalise have a tender moment at the end of her Christmas dinner, in which he reveals that Annalise’s party made him feel at home for the first time in a long time. They almost kiss, but Annalise ends the conversation before Emmett can move in — and given his potential involvement with Nate Sr.’s murder, that seems wise.

OK, your turn. What did you think of the latest Murder installment? Drop all of your reactions in a comment below!