Let’s hope Annalise Keating isn’t claustrophobic. Whether she likes it or not, the walls are beginning to close in on her.

After Thursday’s high-stakes episode, only three installments remain in How to Get Away With Murder‘s fifth season, which means it’s time for Annalise — and pretty much everyone in her social circle — to get very concerned about going to jail. Sure, Annalise and her students managed to avoid jail time in this episode. But with the FBI growing more and more suspicious of Ms. Keating and those closest to her, this particular legal web is getting mighty, mighty tangled.

Read on for the details of “We Know Everything”:

CANDID CAMERA | Against her better judgment, Annalise agrees to represent Gabriel in his new legal battle — which, at first, appears to have nothing to do with Ronald Miller, Annalise, or either of the Nates. Instead, Gabriel is being slapped with a domestic terrorism charge (!), after police identified him in a 2014 protest photo where he’s attacking a cop with a chemical agent. Gabriel privately admits to Annalise that it is him in the photograph, but given that he’s wearing a mask in the picture (which obscures most of his face), it would be nearly impossible for anyone to confidently and accurately identify him.

The charges against Gabriel are ultimately dropped pretty swiftly, and Gabriel has reason to be both happy and annoyed about that. The good part? It turns out that FBI agents planted evidence in Gabriel’s apartment before they arrested him, which immediately brings the ordeal to an end. The bad part? The evidence-planting was only discovered via footage from Frank’s hidden camera in Gabriel’s apartment — and Gabriel is rightfully pissed to learn that his classmates have been spying on him for weeks. (Michaela later dismantles the camera for Gabriel, and there’s clearly a little somethin’-somethin’ still going on between them.) 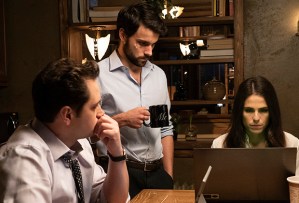 But Gabriel’s brush with the FBI was never really about domestic terrorism, of course. Rather, Agent Claire Telesco just wanted to get him in the door so she could attempt to turn Gabriel against Annalise. Agent Telesco offers Gabriel immunity in exchange for any intel he might have on Annalise — but her interactions with Gabriel don’t exactly pan out as planned. (More on that in a minute.)

While all of this is going down, Nate, Frank and Bonnie are desperately searching for anything in Miller’s history that would link him to Gov. Birkhead. (To refresh your memory: Not only do they want Birkhead to take the fall for Nate Sr.’s death, but they’re trying to pin Miller’s murder on her, too.) After several days of nothing but dead ends, Nate finally finds something — but it’s not good for Annalise. It seems that Miller once used his burner phone to call Maria Sloane, the woman from Cleveland’s Department of Child Services who informed Annalise, all those years ago, that her adoption of Christophe/Wes would not be able to proceed. (As you’ll recall, it was the phone call from Maria that ultimately led Annalise to attempt suicide.) From what Nate can gather, Miller found out about Annalise’s attempted adoption and passed that information along to Birkhead.

On one hand, this discovery is great for Annalise; it finally provides a link between Miller and Birkhead, which she’ll need if she wants to take the governor down. But if anyone goes to the FBI with this information, Annalise will be linked even more to Wes, aka Sam Keating’s killer. For now, the only person who can help Annalise out of this mess is Gabriel. Annalise reveals to him that she tried to adopt Wes when he was 11, and that the governor found out about it. Annalise urges Gabriel to help her destroy Birkhead — and he comes through. He goes back to Agent Telesco the next day and cooks up a story that he once overheard Miller talking to someone about Annalise’s adoption plans. When asked who Miller was speaking to, Gabriel responds, “Someone named Lynne.” (Which, of course, is the governor — and, to Telesco’s credit, she seems fairly certain that she’s getting played by everyone in Annalise’s inner circle… which she is.)

At the end of the hour, the police finally find Miller’s body after Nate calls in an anonymous tip. Plus, the Keating Five learn from a news report that FBI agents were seen at Gov. Birkhead’s house, which seems like a pretty excellent indication that Michaela, Laurel, et al. won’t be thrown behind bars anytime soon. But just when the students are beginning to relax a bit, Asher gets a worrying notification on his phone: Connor’s mom just posted an Instagram photo of herself and Asher at the wedding… and Nate and Miller can very clearly be seen talking in the background.

* Tegan Price meets with Agent Telesco about Miller’s disappearance, assuming that Jorge Castillo had something to do with it (like he did Denver’s death). But Tegan is shocked to learn that Jorge isn’t even a suspect in the Miller case — and it’s Annalise that the FBI really wants to know about. In order to keep Tegan quiet, Michaela persuades Oliver to create a fake, shady email address and send a simple, three-word message to Tegan’s Caplan & Gold email: “Hi, Jane Doe.”

Tegan seems horrified by the message, which was Michaela’s intention all along: If Tegan thinks that the FBI hasn’t protected her Jane Doe identity from the Antares case, she’ll be a lot less likely to give the FBI any intel about Annalise. Tegan does, however, report the fishy email to IT, who then contacts Emmett Crawford about it — and Emmett ultimately requests access to Annalise‘s work emails, which can’t possibly end well.

OK, your turn. Your thoughts on this latest Murder installment? Drop ’em in a comment below.