The next time you’re having a terrible day, here’s something to keep in mind: You’ve probably got it better than How to Get Away With Murder‘s Bonnie Winterbottom.

In Thursday’s episode of the ABC drama, poor Bonnie was left to grapple with the fact that Miller may have had nothing to do with Nate Sr.’s death, after all — a revelation that, quite literally, almost killed her. And she wasn’t the only one left reeling in the wake of that news: Nate also experienced a bit of a downward spiral as he tried to piece together Miller’s involvement in his father’s murder.

The result? An episode filled with a whole lotta conspiracy theories and paranoia. Let’s recap what went down in “Be the Martyr”:

CAR TROUBLE | Bonnie plays the audio of Miller’s phone call to the prison warden for Nate and Annalise, visibly shaken that she and Nate may have tag-teamed the death of an innocent man. Nate isn’t convinced that this phone call completely exonerates Miller — but more on him later. The more pressing concern is Bonnie and her already-fragile mental state, made so much worse by the guilt of ending Miller’s life. Annalise urges Bonnie to come straight home after work that day, and she even enlists Asher to make sure Bonnie is keeping it together at the office.

But the concern for Bonnie isn’t enough to raise her spirits. Upon getting home from work, Bonnie attempts suicide by letting her car run while she sits in a closed garage. Fortunately, Frank finds her and gets her out of the vehicle before any real harm can be done (and he even keeps her company in bed that night, pulling her close to him), but it’s clear that Bon-Bon is not even remotely OK after hearing that phone call from Miller.

Nate, meanwhile, is undeterred by Miller’s call to the warden; in fact, he takes the call as further evidence that Miller was up to something, insisting that Miller only dialed the warden’s number that day in order to cover his own tracks. To that end, Nate spends most of this episode trying to prove that Miller was a shady dude — and at the end of the hour, he finally gets a break. Remember the inquest from a few weeks back, which attempted to place blame on the prison guards who killed Nate Sr.? Apparently, the jurors at that inquest were privately slipped some DNA test results behind closed doors, which allegedly revealed Nate Sr.’s DNA on the gun that killed him.

Nate insists that those test results must have been doctored by Miller before their surreptitious delivery to the jury… and after having his own DNA sampled by the FBI, then tested against the DNA from the gun, Nate learns that the samples do not match. In other words, Nate Sr.’s DNA was never on that gun, and the test results were indeed doctored. Was Miller the one who messed with them? For now, it’s unclear. But in the meantime, the FBI has taken Gabriel into custody, since he was communicating with Miller at the time of his disappearance — and Gabriel wants Annalise to be his lawyer. Lucky her! 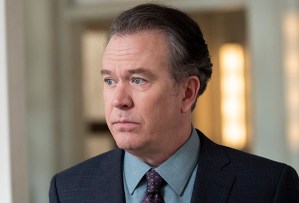 * Annalise fulfills her promise to make Emmett Crawford’s misconduct scandal go away — and he wants to celebrate by taking Annalise out to a swanky dinner. But is he legitimately interested in her, or just playing her? I’m still on the fence.

* After learning that Ronald Miller has suspiciously disappeared, Tegan Price calls Claire Telesco, one of the FBI agents on the case. (Claire, as you may or may not remember, is the same agent who told Tegan she was free to live a regular life after blowing the whistle on Antares.) Tegan asks Claire if they can meet up and talk at some point, but Claire seems taken aback by the sudden communication.

* Laurel spends the episode worrying that her son, Christopher, will forever be traumatized by whatever he saw at the wedding, when he was sitting in the snow. The Keating Five tries to convince Laurel that her baby will turn out just fine; Michaela even reveals that, when she was two years old, she was in the same room as her birth mother when the woman got shot — and she doesn’t remember any of it now. But Laurel remains unconvinced, because no one on this show can ever just chill, you know?

OK, your turn. What did you think of Thursday’s Murder episode? Drop a comment!