The Masked Singer is in its seventh week, which means the competition is bare-knuckled… or as bare-knuckled as it can be when all of the competitors are encased in layers of spandex, foam rubber and synthetic fur.All six remaining contestants — Monster, Bee, Peacock, Rabbit, Alien and Lion — performed in Wednesday’s episode, which marked the first time everyone left in the running appeared on the same stage at the same time. Meanwhile, J.B. Smoove (Curb Your Enthusiasm) joined Robin Thicke, Ken Jeong, Jenny McCarthy Wahlberg and Nicole Scherzinger on the guessing panel.

Read on to find which furry friend was stripped of a mask and shown the exit. 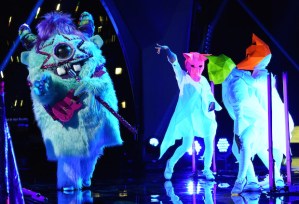 MONSTER | “That’s a real singer,” Jeong commented while Monster jammed out to “I Love Rock N Roll” by Joan Jett and the Blackhearts. Meanwhile, given what we learned this week about the behind-the-scenes action at the show, I marveled at the one-eyed creature’s choreography, which involved a long walk from backstage to the main stage. (My guess: T-Pain.)

LION | Guys, Lion mentioned being from “the Bluegrass State” and ended her clue video by talking about building “my own empire.” You didn’t have to hear her very strong cover of Lady Gaga’s “Diamond Heart” to figure out — and the setup package couldn’t have telegraphed more clearly — that she’s someone who was born in Kentucky (Paducah, perhaps?) and who guest-starred on Empire. (My guess, and it should be yours, too: Rumer Willis.) 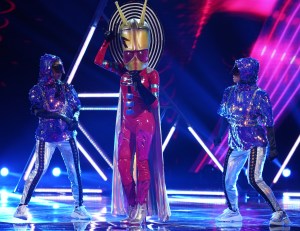 ALIEN | During her performance of “Ex’s and Oh’s” by Elle King, Smoove guessed that the pleather-clad extraterrestrial was Carmen Electra, but he must’ve ignored the frequent references to 1956 in the clue package, which is likely the singer’s birthdate. (My guess: La Toya Jackson, who was born that year.)

BEE | Bee straight-up killed “What’s Love Got to Do With It” and referred to the original artist Tina Turner as a good friend. Despite the misdirection in Bee’s video — aka the oblique references to chanteuses like Turner, Anita Baker and Patti LaBelle — I’m still convinced that my guess is right. (My guess: Gladys Knight.) 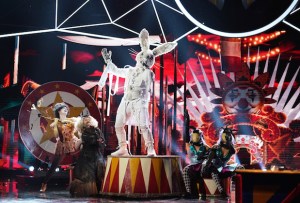 RABBIT | Rabbit rocked out to a frenetic, guitar-heavy arrangement of Stevie Wonder’s “Isn’t She Lovely” while a Bearded Lady and some female contortionists danced around him. Yeah, I don’t know, either. (My guess: Joey Fatone.)

PEACOCK | The big bird performed “Can’t Feel My Face” by The Weeknd and did his usual stellar job, though did his choreography feel a little old-white-man-trying-to-nail-hip-hop-moves to you, too? (My guess: Donny Osmond.)

THE UNMASKING | Alien got this week’s unmasking… and she’s La Toya Jackson, whom Scherzinger and Thicke correctly guessed during the episode.

Now it’s your turn. Did you guess Alien’s true identity? Got thoughts on the remaining masked players? Hit the comments!