It’s the beginning of the end for Into the Badlands. AMC’s martial arts drama will conclude with Season 3, the basic cabler announced on Saturday.

The second half of Badlands‘ third (and now final) season is set to launch on Sunday, March 24 at 10/9c, following a new episode of The Walking Dead. The show will then move to its regular time slot with a new episode on Monday, March 25 at 10 pm.

The official logline for Season 3B reads as follows:

As we enter the final chapter of Into the Badlands, an imprisoned Bajie warns Sunny that Pilgrim can’t be trusted. But with his son’s life on the line, Sunny struggles with his decision to help Pilgrim unlock the Meridian Chamber. Meanwhile, M.K., still reeling from the revelation that Sunny killed his mother, is hell-bent on revenge. Kidnapped by The Master, the Widow is forced to confront her past. Moon meanwhile races to save Lydia from impending death after she risked her life for his on the battlefield. As the last episodes unfold, long buried secrets will be revealed, new alliances will be forged, and the saga will climax in an epic battle to end all battles.

Into the Badlands Final Season Photos 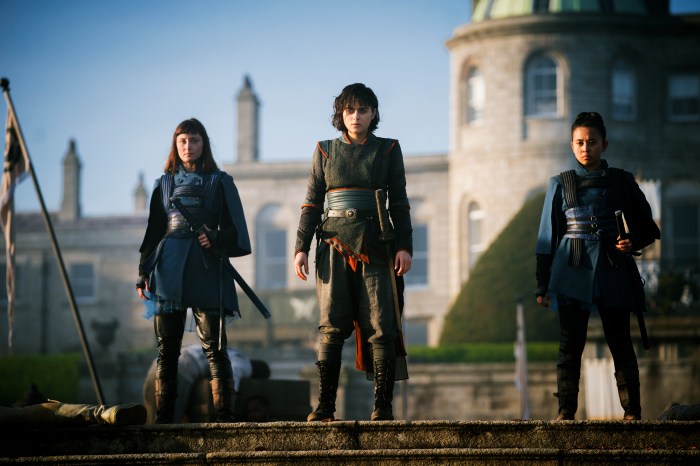 In addition, AMC has released a sneak peek (embedded above), as well as four new photos from the final episodes (which you can view in the attached gallery).

Into the Badlands‘ cancellation caps its three-season run at 32 episodes. TVLine’s Cable Scorecard has been updated to reflect its demise.

Are you upset that AMC has chosen to end Into the Badlands? Hit the comments with your reactions!