Between the low-scoring game and the lackluster halftime show (Maroon 5 & Co. earned an average grade of “D+” from TVLine readers), there wasn’t a whole lot of talent on display during Sunday’s Super Bowl. After the game, however…

CBS awarded the highly coveted post-Bowl slot to the premiere of The World’s Best, a James Corden-hosted talent competition with an all-star panel of judges: actress Drew Barrymore, drag icon RuPaul Charles and country singer Faith Hill. That unlikely trio collaborated with 50 talented “experts” from across the globe to determine whether each act was worthy of proceeding to the next round. Each act needed at least 75 combined points to make it through. 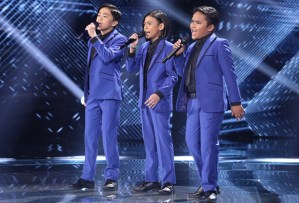 Unfortunately, not everyone received the warm welcome they hoped for; sword swallower Space Cowboy (Australia) turned out to be a one-and-one act. And then there was underwater escape artist Matt Johnson (Great Britain), whose fate — both on the show and in real life — remains in question, as the episode ended with him still trapped in a box.

The World’s Best continues with a new episode on Wednesday (8/7c). Do you think the show lived up to its name? And do you already have a favorite act? Grade the series premiere below, then drop a comment with your full review.