Friday’s episode of RuPaul’s Drag Race All Stars reunited the queens with their nearest and dearest for a true celebration of friendship, which only made that dramatic conclusion all the more ironic.

This week’s challenge required the remaining six queens — Latrice Royale, Manila Luzon, Monet X Change, Monique Heart, Naomi Smalls and Trinity the Tuck — to turn their “best Judys” (aka best friends) into members of their drag family. Additionally, each pair would have to perform a musical tribute to legendary gay icon Judy Garland.

So let’s break things down Judy by Judy: 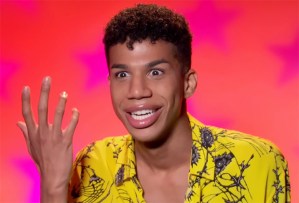 NAOMI | The pressure was on for Naomi and her Judy, Ricardo, as she felt that even a minor slip-up could cost her the competition. “I don’t just want to be two pretty girls walking down the runway,” she said. (You know, something we’ve all felt at one time or another.) Naomi’s fellow queens were skeptical of her plans to do “boy drag,” but when she and Ricardo stepped onto the runway as two Chers — only for Naomi to swap her long wig out for a mustache, transforming into Sonny! — their doubts sashayed away. Guest judge Frances Bean Cobain even called their looks “stunning,” which I’m sure Monique did not appreciate.

MONIQUE | After finally getting a bonding moment with Ru, during which the host encouraged Monique to embrace her vulnerability, this queen stepped up and turned it out. Sure, Michelle Visage called Monique and Danny’s Judy performance “messy,” but the pair’s runway look — two separate ensembles that pieced together to form a fully working face — was the absolute best. (The lips! Those eyes! Them eyelashes! Stunning.)

MONET | The luck of the Irish was with Monet this week, thanks in no small part to Patty, her long-haired Energizer Bunny of a Judy. (Seriously, if Jonathan Van Ness ever gets tired of doing Queer Eye, I think Patty at least deserves an audition.) It also didn’t hurt that Patty is Monet’s assistant, making her used to… assisting. Not only did Michelle praise their “brilliant” Judy performance, but Carson Kressley acknowledged that she’s never looked more gorgeous. A double win!

LATRICE | Proof that the strongest friendship doesn’t guarantee the strongest team, Latrice introduced us to Tim, her Judy of 25 years. And because the show loves bringing up Latrice’s arrest, Ru asked her to explain how Tim “was there for her during her incarceration.” Unfortunately, neither the pair’s performance (which guest judge Ellen Pompeo called “awkward”) nor their sibling ensembles (which Michelle called “two different looks”) were up to snuff.

TRINITY | “He’s a handsome boy, but I don’t know if he’ll be a pretty girl,” Trinity said of her Judy (and boyfriend) Leo, before pivoting to the all-important question: “And what if he’s prettier than me?” Fortunately for Trinity, that didn’t turn out to be the case, though Leo definitely showed promise during their “simple but effective” performance. I also thought Trinity did the best job of making her partner look like an actual relative (in matching “Ver-sayce,” no less!), but as you’ll see, the judges had other opinions.

MANILA | Ms. Luzon also chose to partner with a romantic Judy — her husband Michael, whom she calls her “biggest supporter and source of happiness” — but that’s where their similarities end. Not only did Michelle tell them that they looked “more like distant cousins” than siblings, but the judges also picked apart the duo’s Queen of Diamonds/Queen of Clubs ensembles. “It’s a little costume shop for me,” Carson sneered, not that I necessarily disagree.

Naomi and Monet emerged as this week’s top two, giving them the power to veto either of the bottoms: Latrice or Manila. As expected, it was a dramatic scene as the queens deliberated backstage, unsure of which best friend to send packing. And with the ultimate crown on the line, neither endangered queen was willing to back down. “I love Manila, don’t get me wrong … but I’m not going to sacrifice myself,” Latrice said. “Girl, please! I’ll see you on the other side.”

Taking Ru’s advice to infinity and beyond, Naomi acted a damn fool in her lip sync against Monet, crushing her opponent with savage moves and solid jokes. And while I appreciate Monet’s use of an umbrella full of glitter, it just wasn’t enough. Burdened with the unenviable task of eliminating one of her drag idols, Naomi chose to send Manila home. (Editor’s note: OUTRAGE!)

“It’s a lot to process,” Manila said. “But these queens have to do what’s best for their game, just like I had to do what was best for my game. … It sucks.”

Did the right queen go home this week? Cast your vote below, then drop a comment with your thoughts.