As the first half of Shadowhunters Season 3 came to an end, Lilith went out with a bang. But was it enough to keep a Greater Demon down?

“I always knew she was going to die,” Anna Hopkins shared during a visit to the TVLine offices in New York. “[Showrunners] Todd [Slavkin] and Darren [Swimmer] said, “You’re going to be in these [first] 10 episodes,’ so I knew I was always leading up to that, and I just loved the way she died. That was amazing, exploding into a million pieces.”

Memories From the Set: Anna Hopkins 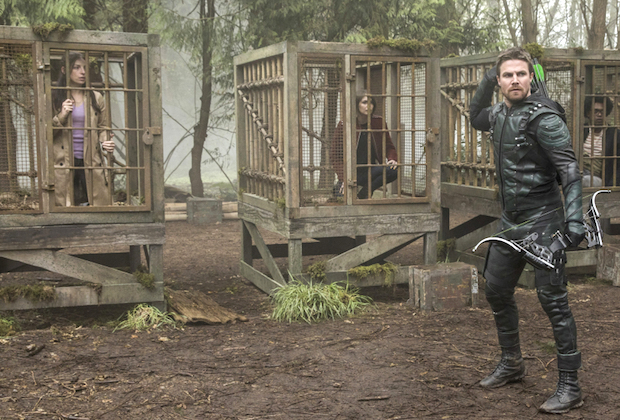 The Freeform drama returns on Monday, Feb. 25 at 8/7c with its final 12 episodes, including a two-hour series finale. Did Slavkin and Swimmer — with whom Hopkins previously worked on Syfy’s Defiance — stick the supernatural landing? “They did,” she avowed. “They really took to heart not only the stories that they’re telling, but they wanted to make sure that the fans felt satisfied. So that even though it’s bittersweet, they would feel a sense of contentment for the end of the whole series.

“I know they worked really hard to make it work and also not cut corners,” the actress added. “It’s going to be nuanced, and it’s going to cover a lot of bases. I think people will be happy.”

During her drop-by, TVLine invited Hopkins — who was one of our Workaholics of 2018 — to share some Memories From the Set of Arrow, Nikita and more of the shows she previously called home, as well as offer some final teases about Lilith’s next move. Click here for direct access to the actress’ fun trip down memory lane.

Want more scoop on Shadowhunters, or for any other show? Email InsideLine@tvline.com and your question may be answered via Matt’s Inside Line.