Near the end of last week’s Season 3 finale of The Good Place, Eleanor and Chidi — facing imminent separation, with Chidi volunteering to have his memory wiped in a bid to save humanity — sat down to watch a montage of their time together as a couple, lovingly compiled by their friend Michael. By the end, Eleanor was crying, Chidi was choked up, and I… was strangely unmoved. The lack of emotion I felt, and the finale as a whole, led me to wonder: Is The Good Place losing something by focusing too much on Eleanor and Chidi’s relationship? 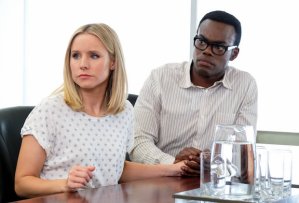 Now before you get out your torches and burn me at the stake, hear me out. I actually really like Eleanor and Chidi as a couple. Kristen Bell and William Jackson Harper’s chemistry together is fantastic, and I enjoy watching how their polar-opposite personalities balance each other out. (He reins in her reckless hedonism with boundaries and structure, and she gets him out of that overly analytical egghead of his. They’re almost a gender-flipped Sam and Diane.) But the latter half of Season 3 spent a lot of time on their relationship — Eleanor declaring her love, Chidi finally reciprocating, their first days as a couple — to the point where it felt like the show was trying to get us to love Eleanor and Chidi as much as they love each other.

The thing is, The Good Place is so much more than just another TV rom-com. It’s trying to tackle nothing less grand than what it means to be a good person, and it feels reductive for a show with such wild metaphysical and philosophical ambitions to boil itself down to a single human romance. It’s always been more innovative than that. Plus, it happens to boast one of TV’s strongest comedy ensembles, top to bottom, and the finale’s focus on Eleanor and Chidi ended up pushing everyone else — Michael, Janet, Jason and Tahani — to the margins. (I actually might be more emotionally invested in Jason and Janet’s romance at this point, to be honest.) 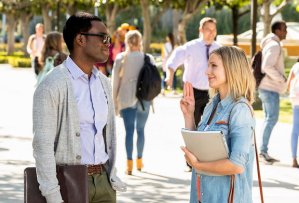 But then again, longshot couples like Eleanor and Chidi have always been a specialty of The Good Place creator Michael Schur. The Office‘s Jim and Pam were kept apart by her engagement, Parks and Recreation‘s Leslie detested Ben before she realized she liked him (and loved him), and Brooklyn Nine-Nine‘s Jake and Amy had a teasing brother-sister energy back when the show started. And I can’t speak for Brooklyn Nine-Nine (I haven’t watched regularly since Season 2), but The Office and Parks and Rec actually lost a bit of their charm after those couples finally got together. It’s a variation on the old Moonlighting curse, that our interest in a TV couple quickly evaporates once they make things official… and I’m hoping it doesn’t befall The Good Place, too.

The recent focus on Eleanor and Chidi does make sense on a certain level: After all, Eleanor is the show’s central character, and her ethical evolution is the central conflict, so her relationship with Chidi has to be front and center. And it is a sweetly romantic touch that, no matter how many times they’re rebooted, they always find their way back to each other. But all those reboots are a double-edged sword: Watching them get together, only to be split apart, again and again, season after season, is dangerously close to becoming repetitive. In the end, Season 3’s final twist turned a show about good and evil and heaven and hell and eternity… into just another show about a couple breaking up. I’m still rooting for Eleanor and Chidi — but I’m rooting for The Good Place to keep expanding beyond them, too.

Alright, it’s your turn to weigh in: Vote in our Eleanor/Chidi poll below, and drop your extended thoughts on the couple in the comments.