The Good Place wrapped up Season 3 with a finale that ended with an enormous sacrifice — and we’re still in mourning.

Thursday’s finale picks up where we left off, with Michael panicked that his plan to show Judge Gen that humans can actually improve might be an “epic fail” — and then Shawn and the Bad Place demons will take turns torturing his human friends while wearing that “Michael suit.” So while he’s incapacitated, Eleanor is forced to step up, telling newly arrived human John she’s “the architect” and showing him around the “Good Place.” (She introduces Michael as her assistant, newly transferred from “dog heaven.”) John has lots of questions, of course, and Eleanor quickly pawns him off on Janet, who has all the answers. (Craziest celebrity hookup ever? “Drake and Ruth Bader Ginsburg. On and off for years.”) 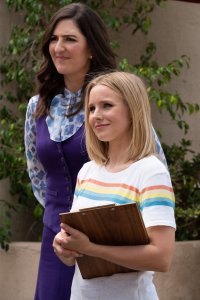 Eleanor quickly settles into her new role: “I’m a world-class liar, baby!” (Chidi: “Very fun thing to hear from your girlfriend.”) But there’s a problem: It turns out that, back on Earth, John was a vicious gossip blogger who wrote lots of mean things about Tahani. (He teases her for dying in Canada: “That’s like the nip-slip of dying.”) Tahani realizes that the humans chosen for the experiment are “the people who would be the worst for us” — and that’s confirmed when they see the next dead human: Chidi’s ex Simone. They take their complaint to Judge Gen, and she decides Simone can stay as long as Michael erases her memories of Chidi and the gang. So when she wakes up, she’s blissfuly unaware while Eleanor shows her around, enjoying a frozen yogurt that’s a swirl of “half strawberry, half male coworker who gets called out for stealing your ideas.”

Chidi thinks this can never work, though: The only solution, in his eyes, is to erase his memory and reboot him completely, so his awkwardness around Simone won’t sabotage the experiment. Eleanor doesn’t want that, obviously, because that would erase their entire relationship. (Jason is distraught, too: “Will you remember… pizza?”) But Chidi is convinced this is the only way, and he and Eleanor spend one last night together, with Michael showing them an enchanting montage of their romantic highlights. They both tear up, but Eleanor still has hope: “We’ve found each other before hundreds of times. We can do it again.”

A heartbroken Eleanor turns to Janet for answers, but this is one time she doesn’t have any; actually, she says, the very fact that she doesn’t have all the answers to the human heart is what makes humanity so beautiful. So Eleanor decides to “embrace the pandemonium” of being alive, and opens Michael’s office door to greet Chidi, who’s freshly rebooted… and has no idea who she is.

Grade tonight’s Good Place finale in our poll, and then hit the comments to share your post-Season 3 thoughts.