Wednesday’s film noir-flavored Riverdale served up so many shocking revelations, let’s just go through them one by one, shall we?

HIRAM’S HAVING AN AFFAIR! | Well, maybe this isn’t completely shocking, but it is juicy: Veronica, dressed like a film noir femme fatale, hands private eye Jughead a stack of cash to find out who shot her dad. She says she overheard her mom fighting with Hiram about “breaking a promise,” so Jughead makes a beeline for Hermione, theorizing she could’ve hired the shooter. Hermione laughs it off, and says the argument started when she discovered Hiram was cheating on her with an icy blonde who’s holed up at the Five Seasons. She suggests to Jughead that he go question her: “You do know how volatile blondes can be.” 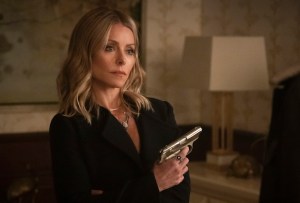 Jughead does eventually track down Hiram’s mistress Ms. Mulwray — hi, Mark Consuelos’ real-life wife Kelly Ripa! — and guesses that the Glamergé egg in her hotel room was a gift from Hiram. She pulls a pistol on him, but she also admits she’s on Hiram’s payroll as a “water inspector”: “I do a job. I get paid for it.” As for why Hiram put his mistress in charge of inspecting the town’s water, well… stay tuned.

JOSIE GOT SOME LINES! | Archie is still reeling from all his recent traumas, and decides that working for Fred’s construction company might help him get his head on straight. But after he angrily shoves his foreman and gets fired on his first day, he’s got nothing better to do but drink away his sorrows at Veronica’s speakeasy. Luckily, Josie saves him from getting booted out of the bar, and gives him a much-needed dose of tough love by tossing him into a cold shower. After he dries off, she gently suggests that he channel some of that anger into his music, or at least some boxing with Mr. Keller. (This must be the most Josie’s spoken since Season 1, right?) 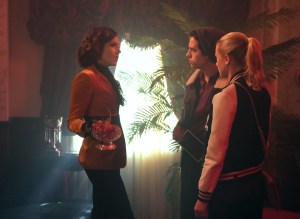 CHERYL’S MOM IS A SERIAL KILLER! | Betty is investigating Claudius Blossom’s death — she’s not convinced it was a suicide — and, thanks to a chat with Hal, starts thinking Cliff Blossom’s death wasn’t a suicide either. The trail leads her and Jughead to the Maple Club, Penelope’s “not-so-secret sex club” that specializes in domination: “At the Maple Club, it is the men who suffer.” Cheryl’s mom admits she’s running the place, but won’t admit to being involved in Claudius or Cliff’s deaths. Betty gets a break in the case, though, when she has the town’s creepy coroner dig up Cliff’s autopsy: He didn’t die of asphyxiation from the hanging, but of a fatal dose of puffer fish venom. In other words, he was dead before the noose even went around his neck.

Betty confronts Penelope with the evidence, dubbing her “the Red Dahlia,” and Penelope confesses she’s been poisoning people — but only men. “They are the true poison,” she hisses, while adding that Claudius was dumping the runoff from Hiram’s Fizzle Rocks lab into Sweetwater River, and that’s what was causing the seizures all over town. And speaking of Fizzle Rocks…

SHERIFF MINETTA’S ALIVE! | With Hiram incapacitated after the shooting, Veronica takes charge of the Lodge crime syndicate, collecting protection money with Reggie’s help. (He poses as Hiram in the back of a limo to scare victims into paying up.) But she’s still nursing a grudge against her mom: She accuses Hermione of being in cahoots with Hiram’s Fizzle Rocks empire. Hermione denies it, adding that the quarantine was actually a smokescreen to give him a chance to shut the drug lab down — Ms. Mulwray fudged the water report to ensure the quarantine — but he took the opportunity to consolidate his power instead. (Maybe that’s the “breaking a promise” Veronica overheard?) 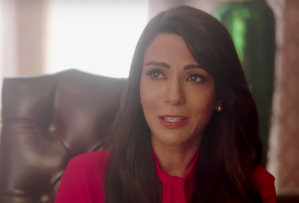 Hermione intends to sell off the drug lab, but Veronica spoils that when she and Reggie torch the lab’s drug supply and equipment instead. Hermione isn’t exactly a model wife, either: Jughead discovers that she’s been having her own affair… with Sheriff Minetta! He’s alive! (Hermione paid off the coroner to ID that decapitated body as him.) Jughead spies on them in an intimate moment, as Hermione asks Minetta to take care of their “outstanding problem”… and frame F.P.

F.P. SHOT HIRAM! | Jughead rushes to warn his dad, and gets a shock: F.P. confesses that he was the one who shot Hiram. He wanted revenge on Hiram for targeting Jughead, so he struck a deal with Hermione: He’d shoot Hiram, and Hermione would name him sheriff. But now that Hermione’s looking to double-cross him, F.P. makes a new plan. He summons Hermione to the police station, where he’s doing an on-camera interview with Alice, announcing that they caught Hiram’s shooter… Tall Boy. (He makes up something about “resisting arrest” to explain Tall Boy’s demise.) He also invites Hermione to speak on-camera, but she slinks away — and puts a bullet in Minetta’s head herself to tie up that loose end.

ARCHIE AND HIRAM ARE COOL NOW! | The feud that’s lasted several seasons now is finally over. Archie realizes the one inner demon he still needs to slay is Hiram, so he sneaks into the guy’s hospital room, gun in hand. He tells a comatose Hiram that he can’t forgive him for sending a second Black Hood to shoot Fred — “Maybe it’s time to balance the scales” — but he’s interrupted when another hooded assailant enters to kill Fred. Archie shoots the assailant and scares him off, and now he looks like the hero who saved Hiram’s life. When Hiram regains consciousness, he offers Archie a truce: “You don’t make a move against me, and I won’t make a move against you.” (Yeah, we’ll see how long that lasts.)

* Yes, a Nana Rose sighting! The delightful old bag made an appearance at Claudius’ funeral, scoffing after Penelope’s eulogy: “Crocodile tears.” She makes every episode she’s in at least 10 percent better, doesn’t she?

* Am I the only one sensing — and rooting for — a possible Archie/Josie hookup in the near future? Hey, that would guarantee her some screentime, at least. Speaking of which, LOL at her telling Archie, “I know we didn’t talk much last year…” Yeah, because you were barely in Season 2!

* Why was Hiram’s hospital ward completely deserted when Archie came in? And how did he even get inside? It was abandoned, and unlocked?

* Guess Hermione wasn’t that attached to Sheriff Minetta if she’d kill him in cold blood like that, huh?

* This week’s episode featured a lot of nods to classic film noirs like Chinatown, but I’m guessing viewers’ movie tastes are more in line with Reggie’s, as he revealed when Ronnie laid out her drug lab plan: “Sounds like the plot to Bad Boys II… but I’m in.”