We so rarely see the Riverdale kids actually studying that this week’s SAT prep storyline might be Season 3’s most shocking plot development yet. That didn’t stop the death toll from creeping higher, though… 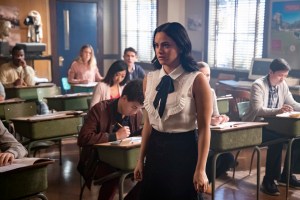 That toll doesn’t include Archie, of course: He survived last week’s bear attack with not much more than a couple of sexy scars, and returns to Riverdale a new man. Veronica runs back into his arms — not mentioning that while he was gone, she got herself a new man, mind you — and they pick up right where they left off, with a passionate make-out session. Soon, Archie is back in a booth at Pop’s, getting caught up on all the latest gossip: Jughead’s Serpents are ready to protect Archie from Hiram, Fangs is working deep undercover with the Gargoyles — and oh yeah, the SATs are this weekend! Betty and Jughead promise to help Archie get up to speed on his vocabulary words… but Principal Weatherbee thinks it’d be best if Archie just repeated his junior year. (This is all just The CW’s way of keeping Archie in high school longer, isn’t it?)

Archie bombs his SAT practice test, and is feeling generally hopeless, so Veronica throws him a welcome-home bash at the speakeasy to lift his spirits. (She also informs Reggie that their little fling is over, now that Archie’s back.) But while she’s serenading Archie — in Spanish! — he has visions of his bear-attack hallucinations and runs out mid-song. Meanwhile, Hiram is plotting to turn the vacant Sisters of Quiet Mercy convent into a “castle” for the Lodge family, and pushes Hermione to name Claudius Blossom the town’s new sheriff. But Jughead is quickly closing in on him: Fangs gets invited to a Gargoyles initiation ceremony in the woods, and the Serpents take the opportunity to strike, invading the ceremony and unmasking the Gargoyle King. It’s… disgruntled ex-Serpent Tall Boy! 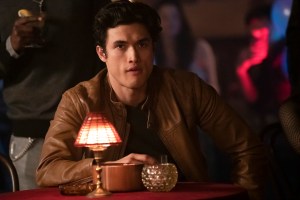 The Serpents haul him back to Dilton’s bunker and rough him up, forcing him to lure Hiram out of hiding with a promise that he’ll hand over Archie. They only succeed in luring out Claudius, though, who F.P. throws in a holding cell via a “citizen’s arrest” (???). But Archie has bigger problems: When he approaches Reggie about “cheating” on the SATs, Reggie misunderstands and accidentally spills the beans about his tryst with Veronica. Archie confronts Ronnie, who breaks down in tears about it, saying how mad she was at him for leaving Riverdale and not staying and fighting for her. He assures her she did nothing wrong, and they make up… for now.

The day of the SATs, everyone has their Number 2 pencils sharpened and ready… except for Archie, who ditches the test after getting freaked out by more visions. Back in his study, Hiram is gloating about how untouchable he is — when a sniper bullet zips in and hits him in the chest! Suddenly he’s clinging to life in intensive care, and Veronica is left wondering if Archie ran out of the SATs to go shoot her dad. (If they weren’t broken up before, they are now.) Plus, we add a couple of bodies to Season 3’s body count: Tall Boy ends up dead, after Fangs and Sweet Pea accidentally shoot him, and Claudius is found dead in his holding cell. Oh, and the vacant sheriff’s title is taken by… F.P.! Not sure about that hat, though. 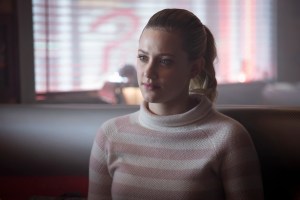 DADDY’S HOME | Betty has a lot more than just the SATs on her mind this week. (She probably aced those, though.) She discovers that Alice drained her college fund and gave it all to The Farm, forging Hal’s signature to do it. So Betty is forced to reconnect with her serial killer dad in his Hannibal Lecter cell to get her money back, and yep, he’s as creepy as we remember. He even has a confession to make: He says he was the one who invited the Midnight Club to Ascension Night… and killed Principal Featherhead. (He was trying to kill them all, you see.) Betty digs deeper, though, and discovers that’s all a lie. He only knew about the Midnight Club thanks to his ongoing affair with Penelope Blossom. He confesses he lied just to get Betty talking to him again… and after Alice and The Farm use Betty’s money to buy the Sisters convent, Betty realizes she’s better off spending time with a deranged murderer than her own mom.

* So… who shot Hiram? Fred has to be a leading candidate, right? Along with F.P., maybe even with Hermione’s approval, since those two seem to be in cahoots. It’s tough to run a criminal enterprise from a hospital bed, after all.

* Don’t feel bad that you didn’t know “iconoclast” meant, Archie. I had to look it up myself. Veronica’s clearly been brushing up on her SAT words, though, casually using “in extremis” in a sentence.

* Have we ever figured out the internal logic of how Hal justifies sentencing all sinners to death… while cheating on his own wife with Penelope?

* Chilling Adventures of Sabrina fans: Didn’t the Gargoyles’ ceremony in the woods conjure up memories of Sabrina’s Dark Baptism? (Heck, it might even be the same forest.)

* Archie is taking swigs from a secret bottle of booze stashed in his desk drawer. Uh-oh… Luke Perry knows a little something about teen alcoholism, though: