Riverdale‘s quarantine may have been lifted… but that didn’t stop Archie from having one heck of a fever dream this week. 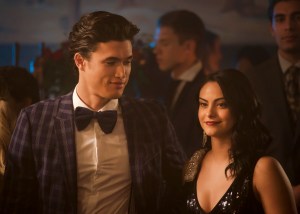 We pick up more than a month after the winter finale, with the quarantine officially over and Jughead back inside the city limits, but the town looks a lot different. Business is booming at Veronica’s speakeasy, now that she’s selling real booze along with her mocktails. Cheryl and Toni are pulling off daring burglaries in cute cat masks — they’re cat burglars, get it? — when they’re not busy pawing at each other. Betty is letting all the kids she freed from the Sisters of Quiet Mercy stay with her in her house, and Archie is holed up in a remote cabin in the Canadian wilderness, with only his dog Vegas to keep him company.

There’s one big problem with living alone in the wilderness, though: There’s no one there to help when Archie is viciously mauled by a grizzly bear (!!!). He stumbles back to his cabin, badly bleeding, and patches himself up as best he can while waiting for help to arrive. Cue the highly metaphorical fever dream! Archie has a vision of Cassidy and the three other dead trial witnesses playing a game of G&G; they blame him for their deaths, and challenge him to a game to win the right to return to Riverdale. He pulls a quest card — “Defeat the dreaded Spectre of Death” — and flashes back to the moment the Black Hood shot Fred, this time stopping him and killing him first. But Warden Norton’s ghost tells him that won’t do it; he needs to roll again.

He picks a new quest card, this one telling him to kill the Man in Black, so he enters Hiram’s study, telling Veronica’s dad he should’ve killed him when he had the chance… and stabbing him in the gut! But that’s not the answer, either. Now ghosts of Veronica, Jughead and Betty sit around the G&G board, and give him one final quest: He finds himself in his attic bedroom, where he confronts — himself? Archie grabs a baseball bat, declaring that “he’s the one that got me into this trouble,” and though Fred tries to calm him down (“You are not the villain you think you are”), Archie smashes his other self to a pulp. When the park rangers finally arrive, they find Archie bleeding out, and unresponsive. C’mon, Archie can’t die… can he? 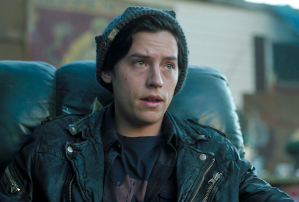 GANGING UP | Back in Riverdale, Veronica is getting squeezed by her dad to pay for protection on the speakeasy, and to emphasize the point, Hiram’s Gargoyle goons beat up Reggie during a liquor run. She tries to cook the books to pay him a smaller percentage, but he sees right through that — and gets even less friendly when Cheryl and Toni break into his penthouse and steal a “Glamergé egg.” (Oh, Riverdale, you and your fake brand names.) Jughead’s not a fan of Hiram’s, either: He’s flooded the town with Fizzle Rocks, and the Serpents have started selling them in their leader’s absence.

Jughead tries to put his foot down and orders them to stop committing crimes, but Fangs protests that without the drug trade, they’ll be broke. So Jughead comes up with an alternate source of income: Veronica says she’ll hire the Serpents to protect her club, if he can get Hiram back that Glamergé egg. Jughead retrieves the egg from Cheryl and Toni… but also kicks them out of the Serpents for their cat burglary spree. Veronica returns the egg to her dad — smashed — while the Serpents chase off the Gargoyles during another liquor run. But wait! The biggest news of all: Reggie pulls Veronica in close… and they kiss! See what happens when you run off to Canada, Archie? 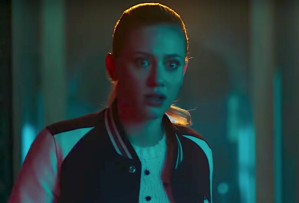 SISTERS, SISTERS | Betty has her hands full with all the Sisters of Quiet Mercy refugees crashing with her, and her only hope is to get the convent’s nuns to testify against Hiram about the Fizzle Rocks drug ring he set up there. They’re all taking a vow of silence, though. Betty consults with Mayor Attorney McCoy, who digs up the fact that the Sisters were kicked out of the church decades ago, and therefore their vow of silence is null and void, pushing Sister Woodhouse to testify. She reluctantly agrees… but before she can, Hiram bails all the nuns out, and Betty finds them back in the convent, all dead, all with blue lips. And back at home, Alice has solved the housing crisis… by shipping all the Sisters kids off to the Farm to stay with Edgar Evernever.

* Jughead also assigned Fangs to go undercover inside Hiram’s Gargoyle gang and come back with intel. Anyone else think Fangs might not survive to see Season 4?

* Poor Josie. She gets attacked by the Gargoyles, and then when she complains to Veronica about it and says she can’t sing at the speakeasy anymore, Ronnie just goes ahead and takes over singing herself!

* Despite the intense peril Archie was in this week, he still managed to give us a gratuitous shirtless shot when he examined his bear wounds. (Also, how is his ramshackle cabin bigger and more nicely decorated than my apartment?)

* Making an enemy out of Cheryl Blossom might not have been the smartest idea, Jughead.

* LOL at Ghost Betty asking Archie if he’s been working on any new songs lately. Yeah, Archie, it’s been a while!