Riverdale ended its 2018 run on Wednesday with a warm and fuzzy fall finale that reminded us of the simple joys of the holiday season… nah, just kidding. 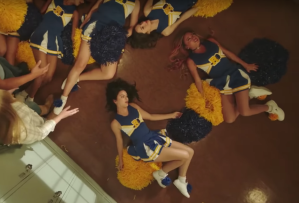 The CW’s teen drama actually left us on a terrifying note, with Hiram getting the governor to put the whole town under quarantine after a mass seizure struck Riverdale High’s student body. Archie headed for the Canadian border alone, and after a visit with his long-lost mom Gladys (hi, Gina Gershon!), Jughead got stuck outside the Riverdale city limits with F.P. when the quarantine came down, with no way of getting back in. Oh, and Hiram warned Veronica that something “practically Biblical” was about to come down, as he ‘fessed up that he’s pulling the strings on the town’s Fizzle Rocks epidemic.

With no new episodes for a full month — Riverdale resumes Season 3 on Wednesday, Jan. 16 — we had to reach out to executive producer Roberto Aguirre-Sacasa to help us make sense of that fall finale. Read on as the EP teases that the winter premiere will feature a significant time jump, weighs in on the current status of Archie and Veronica’s relationship… and reveals the real-life “hair traumas” behind Archie’s new look.

TVLINE | Riverdale is under quarantine. What does that mean for everyone, inside and out?
Well, we always say that the show is about a town, and not just about any individual character. Last year, we built to a riot, because that’s something that happens to the entire town. When we started breaking this episode, we thought, “Oh, another thing that could potentially have town-wide implications is a quarantine.” And we thought there might be something interesting to play with: Some of the people are inside, some of the people are outside, some of the people like F.P. and Jughead were trying to get in just as the quarantine came down. It might split our characters and give them something to fight for, to get back together in the next part of the season. 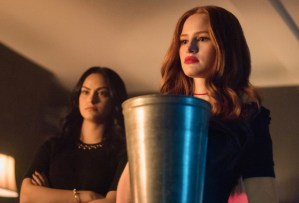 TVLINE | Archie and Jughead are stuck on the outside, looking in. So is it up to Betty, Veronica and Cheryl to figure things out on the inside? We haven’t seen them together much lately.
We are going to see different pairings when we return. I can also tell you that there will have been a bit of a time jump when we return. We time-jumped over the summer, and there’ll be another bit of a time jump when we come back, and we’ll see what Riverdale has been like under quarantine, and as a town besieged.

TVLINE | Archie is talking about his relationship with Veronica in the past tense now. Are they actually broken up?
I can tell you that in my mind, and story-wise, Veronica and Archie have not broken up. That has not happened yet. They did have that tearful phone call, but a lot of that was circumstantial. None of that really had to do with their feelings for each other. So in my mind, even though they had that tearful goodbye, and it’s going to take some figuring out, if and when they come back together… in my mind, they’re not yet broken up.

TVLINE | They are physically separated now, though. Is there any chance that other romantic options come into play? I’m seeing Reggie and Veronica getting closer…
I think, if and when they do break up, that there are definite candidates for who either might date. But I wouldn’t put the nail in the coffin of “Varchie” quite just yet. 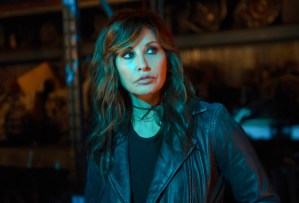 TVLINE | We met Jughead’s mom Gladys for the first time. What’s the status of her relationship with F.P.? They’re technically still married. Are there still feelings there?
I think there is a fondness between them. I don’t know how intimate they’ve been recently — not that that’s surprising, since they’ve been living in separate cities. But there are definitely feelings of fondness, and I don’t think that story’s finished, either.

TVLINE | Another huge development: We saw Archie dye his hair! Is he even Archie Andrews without that red hair of his?
That is a huge question motivating the next few episodes. I’m not even kidding you! It’s a giant question. It’s funny: KJ [Apa] called me and was like, “Dude, do I really have to dye my hair back and forth, back and forth?” I was like, “KJ, I don’t know what to tell you, dude. We’ve gotta figure out a way to do it.” [Laughs] He was a real trouper about it. 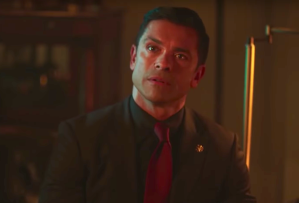 TVLINE | We’ve learned that Hiram is sort of the puppet master behind all of this. What’s his endgame, and how does putting Riverdale under quarantine get him closer to it?
That’s stuff that we’ll definitely be unpacking in the next few episodes when we get back: How does that quarantine benefit Hiram?

TVLINE | Is he actually strung out on Fizzle Rocks? We see him having his own visions of the Gargoyle King.
That last image is provocative, and we left it open: Was it a hallucination? Was it real? What does it mean? That’s something that we’re going to answer.

TVLINE | How does this quarantine affect the rest of the season? Are things too serious to find room for romance or lighter moments?
That’s sort of the daily challenge in the writers’ room: How do you slow a speeding train enough to tell those character stories? It’s been pretty breathless up until Episode 8. I do think with Episode 9 and moving onwards, we are kind of at a slower, steadier build to the finale. So there is a little bit more room to explore romances, and to explore character relationships. I’m really proud of an episode that we do that, bizarrely, focuses on the kids all taking the SATs. That’s a very strange episode for us! We usually don’t do that stuff. But when we come back, it’s definitely a changed Riverdale. It’s a very changed Riverdale.

Got thoughts on tonight’s Riverdale fall finale? Predictions for what comes next? Grab a booth in the comments below.