This week on The Good Doctor, Shaun adjusts to Lea having a boyfriend, as Glassman struggles with the side effects of chemotherapy.

Shaun surprises Lea when he says how much he likes her new boyfriend, Jake. Lea asks if it’d be alright if she invited Jake over to watch a movie, which Shaun misinterprets as an open invite for the three of them to watch a movie together. He returns home from work and pops some corn, then knocks on Lea’s door, interrupting an intimate moment with Jake. Lea comes out and explains to Shaun that he needs to respect her privacy. The three of them can be friends, but she’ll also want some alone time with Jake. Shaun signals his understanding, then Lea agrees to movie night.

Afterwards, Shaun pays Glassman an unannounced visit and discovers that his mentor has been lying to him about his current condition. He finds Glassman in bed, hooked up to an IV; he has an unrelenting headache and nausea as a result of his aggressive PCV treatment. He explains to an upset Shaun that there’s nothing he can do that’d help, so Shaun returns to his apartment, where he confides in Lea. She tells him that he has to respect Glassy’s wishes, even if that means backing off. An appreciative Shaun then thanks Lea for her advice and says that his life is better when she’s in it. (D’aw!) 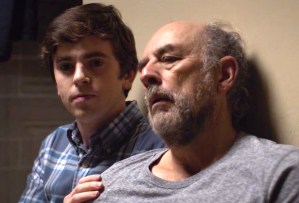 The following night, Shaun is able to hear Lea and Jake canoodling through the wall. He tries to ignore it, but he can’t. He opens his dresser drawer and pulls out a pair of noise-cancelling headphones, but it’s not enough. It’s more than just the sounds; Shaun is clearly not OK with the current dynamic, but he doesn’t know what to make of those feelings — at least not yet. And so, he picks himself up and heads back over to check on Glassman. He finds his mentor on the bathroom floor, unable to pick himself up after throwing up. Rather than say anything, Shaun gets down on the floor and sits by Glassman’s side to offer his shoulder. He can’t be Glassman’s doctor, but he can still be his friend.

* Melendez and Lim continue to keep their romance a secret from Andrews. Meanwhile, the search is on for a new chief of surgery (though the casting search ended weeks ago).

* Mia gives Park a call at work. Having promised that he’d open up more, Park tells Claire that he’s gotten back together with his ex. Claire congratulates her coworker, and says she’s there for him if he ever wants to talk. 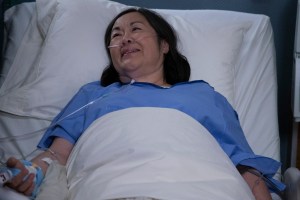 * Melendez’s patient this week is none other than TV’s erstwhile Mrs. Kim! Gilmore Girls vet Emily Kuroda plays Sunny Lee, who is rushed to St. Bonaventure with a malfunctioning mechanical heart. Over the course of the episode, we learn that Sunny has been estranged from her daughter, Grace, for the last 15 years, having cast her aside after she decided to attend Juilliard and pursue a career in music. Since then, she has essentially replaced her daughter with a caretaker not much older than Grace, and that dynamic proves to Grace that her mother is capable of love. By the end of the hour, both Sunny’s heart and her relationship with Grace are on the road to recovery.

* Last but not least is Lim’s patient, Lana Moore, an autistic woman with arteriovenous malformation. Basically, Lana is at risk of multiple aneurysms and permanent brain damage. The high-risk procedure necessary to remove abnormal blood vessels, during which Lana must remain conscious, runs the risk of jeopardizing her ability to speak. Lim, Shaun and Morgan call on fellow autistic Javi, Lana’s roommate and sometimes friend with benefits, to quiz her during the surgery to make sure that she remains responsive throughout. The operation is ultimately a success, and Javi tells Lana that he’s in love with her.

What did you think of The Good Doctor Season 2, Episode 13? Hit the comments with your reactions!