Sleepy Hollow‘s Ichabod Crane and Abbie Mills unexpectedly returned to Fox last Sunday via one of the most specific, out-of-left-field jokes in Family Guy‘s 17-season history.

The animated comedy’s Jan. 13 episode sent the Griffins to Washington D.C., where Peter had just been hired as the new White House Press Secretary. And when Meg informed her parents that she was sexually assaulted by President Trump, they shut her down immediately.

“Meg, you’ve got to stop with these stories,” Lois told her daughter. “People hate a liar, just like closed captioning stenographers hated the Sleepy Hollow guy for some reason.”

The episode then cut to a 30-second clip from the 2013 pilot of Sleepy Hollow, one that took a few creative liberties with star Tom Mison’s dialogue. According to the closed captioning, the actor was saying things like, “Durr, Im sLeepy HollLo herp derpity” and “I steal Poops and put theM in my butt.” Behold: 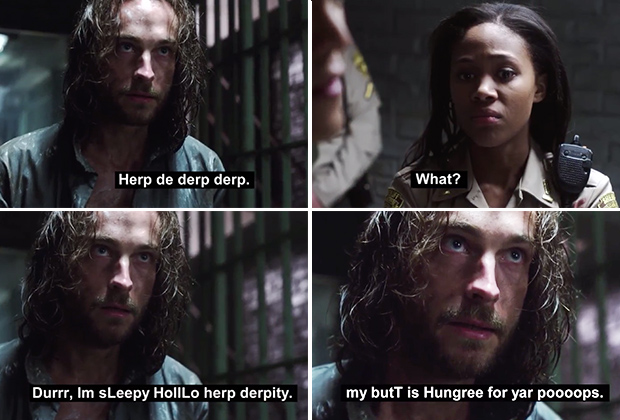 As executive producer Rich Appel tells TVLine, “That joke was all the author of the script, Patrick Meighan. He’s a really talented writer here who, among many things, brings off the wall, original stuff to the show. I certainly wouldn’t have come up with that gag. I don’t know many people who would have.”

In fact, the joke’s randomness — coupled with the usual red tape that comes with recycling footage — nearly kept the joke from making it to air. Appel adds, “There were some people, not from the writers room but people we respect, who questioned that joke every step of the way. And it was actually a little challenging to get clearance for it. We had to do a lot of heavy lifting to get that on the air, so it’s gratifying. To us, that’s the kind of thing that can set this show apart from others. It was really fun and totally different.”

Your thoughts on Family Guy‘s unexpected Sleepy Hollow throwback? Drop ’em in a comment below.